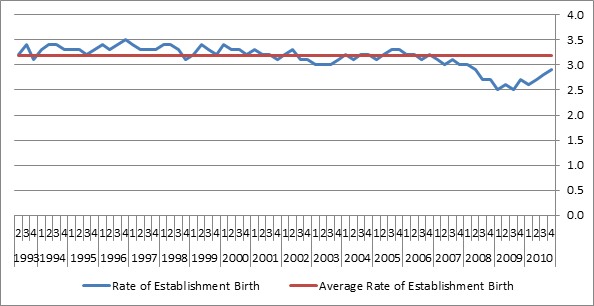 Source: Created from Data from the Bureau of Labor Statistics

Since 1993, when the Bureau of Labor Statistics first made the data available, the new establishment birth rate has averaged 3.2 percent of total establishments in operation, as the figure above shows.

Moreover, BLS data reveal that the rate of new establishment formation remained in a fairly tight range of between 3 and 3.5 percent of active establishments from 1993 through 2007. However, in 2008, that pattern abruptly changed. The new establishment birth rate fell below 3 percent, a decline from which it has not yet recovered.