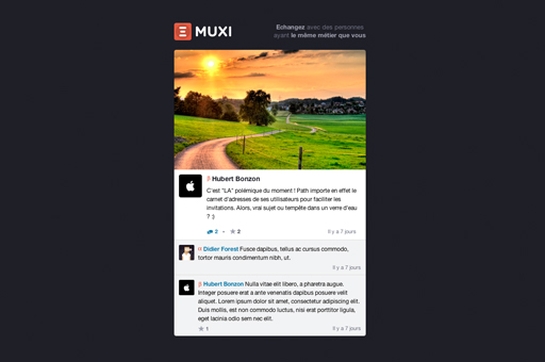 Muxi, a new mobile social media platform, aims to be “the first professional social network.” Unlike LinkedIn, Muxi’s founders claim that the app is a more social place for professional types to connect and network with one another, rather than just a place to post resumes like many do on LinkedIn.

Is there a place for a more social social network for professionals?

Small business owners and entrepreneurs could use a service like Muxi to make connections with other professionals who might help to further their business ventures, and to share ideas with others in similar professional situations. It can be used to find new employees or partners, ask questions, and share experiences.

Muxi’s features include “fraternities,” groups where users can network with others who share similar business goals or work in similar fields. This idea stems from professional fraternities that were used centuries ago. But with Muxi, business owners and other professionals can use this concept to network with others from the convenience of their mobile phones. Muxi also gives users the option to share their posts on other sites like Facebook and Twitter.

However, some critics may argue that professionals already have plenty of places to network online and on their smartphones. From Facebook groups to Twitter chats and even LinkedIn’s group feature, many professional types and business owners are far from strangers to social networking.

Muxi may have its own niche and provide some useful features, but will enough business owners actually sign up so that the app will be useful for networking purposes?

Currently, Muxi is an invite-only app, but prospective users can request an invite from the site itself. In addition to its mobile app, Muxi has plans to launch iPad, Chrome, and desktop apps in the near future.