Crowd-sourced fundraising sites have taken off in recent years, helping individuals and startups raise money for new projects or ideas. But on many of these sites, users need to create a goal amount and a deadline, and also face an arbitrary application process to even be considered by investors.  In most cases, if the goal is not reached by the deadline, the user doesn’t receive any of the money they raised. 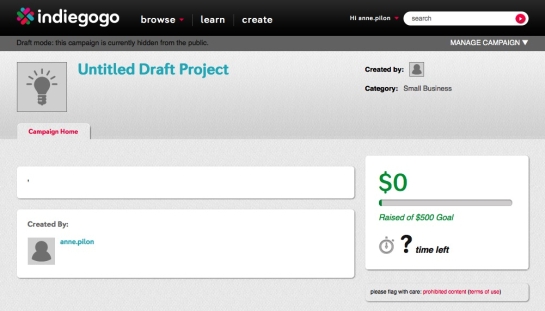 But now a new crowdfunding site, Indiegogo, offers a different type of crowdfunding platform where anyone can sign up, and users can keep all the money raised even if it doesn’t match up with their original goal.

Indiegogo is an online tool that anyone can use to help fund almost any type of project. To set up a campaign, users need only to tell people about their project and what their money will go toward. They can also offer added perks to potential investors to help persuade them to help their cause.

Tech startup FutureDash’s EnergyBuddy first started using Indiegogo because it needed a way to fund its first production order up-front. After the product, a gadget that helps families and businesses monitor energy use, was turned down by Kickstarter for unknown reasons, the company signed up with Indiegogo. CEO, Kevin Strong, says they’ve been very happy with the results:

“In terms of using Indiegogo versus other crowdfunding sites, the benefits are that there’s no approval process required, and it’s easy to get answers to questions from a real person!”

Indiegogo began in 2008 to help independent filmmakers fund their projects, and then it expanded and started serving all other industries in 2009.

Those interested in raising money through Indiegogo can sign up and begin a campaign immediately. All you need to start a crowdfunding campaign is a valid bank account. There is no fee or application process, though Indiegogo charges a percentage of your earnings once your campaign is completed.