We Have A Mission Statement, Credo and Mantra! 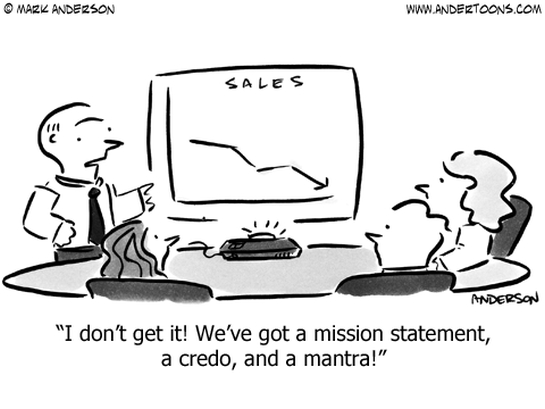 It was decided that we needed one for our upcoming QS-9000 audit thingy, and for a good 3 months we received a new mission almost weekly. All of the other paperwork and documentation went fairly smoothly, but this little detail really had them stymied.

If we’d been honest it would’ve read “Our mission is to get upper management that jet they’ve been wanting for a while now. And some new carpeting would be nice.” But instead we got a parade of seemingly impressive but empty statements that became a running joke with the employees.

When you think about it, why you do what you do is a serious and thought-provoking question. But if it turns out to be a real stumper, maybe you’ve got other questions to be asking.