Klout has just started rolling out a completely new system for measuring influence. The new interface has already begun updating scores for many users, based on a different set of criteria that mixes online influence with real-world influence. The site has also begun adding some new features that let users see their most influential posts and topics. 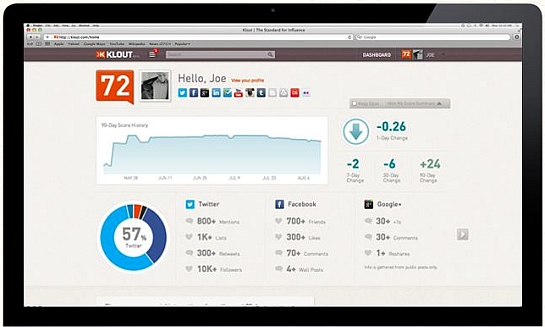 Previously, Klout only accounted for things like number of friends on Facebook and number of retweets on Twitter when calculating influence. But now a user’s Klout score goes beyond that to include things like job titles from LinkedIn and the importance of that user’s Wikipedia page.

In addition, +K’s from other users now impact Klout scores, whereas before they only influenced that user’s influential topics.

The site has also introduced a new feature called “Klout Moments” that showcases a user’s most influential tweets and posts from the last 90 days. For companies that use social media for promotion, measuring influence using a service like Klout can help to determine what types of posts work and what types of posts don’t.

With the new Klout interface, companies can specifically see what posts are the most influential and what people are most influenced by them.

Old features like True Reach, Amplification, and Network impact scores have been removed in order to make room for Klout Moments. Moments are available for some users now and the rest will begin to see the new feature within the next few weeks.

Klout also has a few new features currently in the works, including more networks like YouTube and Tumblr, and an enhanced topics system.