Projectbook Update: Manage Different Types of Data in One App

Since so many business professionals use iPads and other mobile devices to accomplish work-related tasks, productivity apps can be essential for saving and sharing information on-the-go. However, with all the different formats that data can be viewed and saved, simple note taking apps may not be quite as useful anymore. 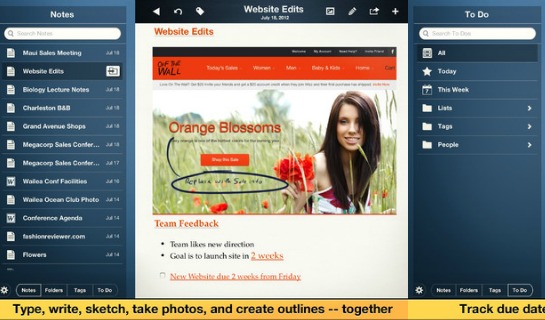 Theory.io has released the first update for its iPad productivity app, Projectbook. The app allows users to keep a notebook that uses and saves different fonts, sketches, documents and more.

Users can also record audio, take photos, make outlines and import information from email, attachments, and websites. All of this information, even in different formats, can be kept on the same notebook pages and organized so that information can be easily found later.

The update includes more than a dozen new features and enhancement based on user requests from the initial release. Among those features is the ability to print notes on any AirPrint enabled printer. Those notes can even include sketches, images, and text in different fonts. The update also includes integration with Dropbox, faster tasks, and bug fixes.

In addition, the app lets users manage their to-do lists in the same space where they keep the information needed to accomplish their tasks. To-dos can even be turned into projects with sub-lists, so that large jobs can be broken down into small, manageable tasks.

Productivity apps aren’t exactly rare for mobile devices, but the user interface and unique format of Projectbook makes it distinctive from the competition. The ways in which a user’s notebook can be customized, along with all the different formats that can be saved, makes the app a helpful tool for small business owners and anyone with multiple projects to manage.

Projectbook has extended its introductory price, 70% off the regular price, through September 7, 2012 and the new update is free for existing users.