Many companies benefit from testing their website with users before it goes live so that they can make sure their user base isn’t confused or frustrated by features of the site. But now, many American consumers use their mobile devices as much, if not more, than their traditional computers or laptops, and usability on the mobile web is completely different. 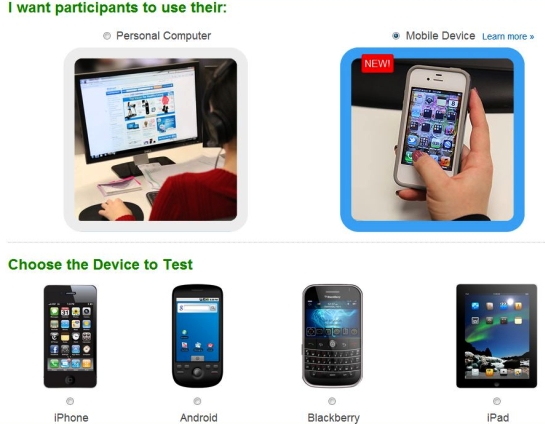 Using the service, app launchers can actually watch UserTesting’s panel of mobile users trying out the app on their iPhones, iPads, Android devices or Blackberry smartphones, so that companies or app developers can get a first-hand look at what parts of the app may be confusing, frustrating, or uninteresting.

Companies looking to launch an app, or even those who have already launched one, can create a set of tasks they want each tester to perform while using the app, so that they can get the full user experience. Testers then use webcams to record their experience and give real-time feedback about what works and what doesn’t.

App creators can also receive written answers to questionnaires about their app or mobile site. Companies can start receiving feedback from testers in as little as one hour.

As apps and mobile browsers become more and more common for consumers and professionals, the importance of creating easy-to-use mobile apps and websites can’t be understated. Whether companies decide to hire outside developers or create their sites or apps themselves, services like UserTesting provide companies with extra sets of eyes who can give honest feedback, insights, and suggestions for improvement.

UserTesting offers a number of different plans and pricing depending on the number of participants. Businesses can also select which devices they’d like people to use when testing their app or site. Companies can run tests for mobile apps currently available and those that have not been released to the public yet, as well as mobile websites.