A recent Gallup poll shows small business satisfaction levels have gone up.  However, it’s a case of good news / bad news.  It’s good news to see an uptick of any kind.  But that good news is tempered by the fact that satisfaction has barely gotten back to the 2008 level, and small business owners are still 12 points under the high point of satisfaction from 2006.

Be careful not to misinterpret this poll. Small business owners may feel satisfaction and a degree of success, but don’t necessarily see conditions getting much better. This particular poll is more about pride in self-reliance, versus a measurement of how well things are going.

The poll was conducted in mid-July, 2012.  Here’s what the chart looks like: 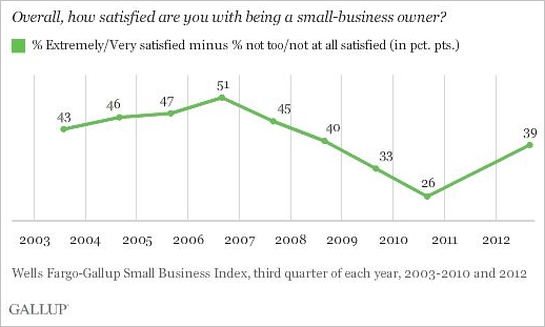 The poll is part of a quarterly survey using a random sample of 600 small business owners.

In the poll, 55% of small business owners expressed satisfaction with their role as a business owner. That rate hasn’t been seen since July 2008 during the recession.

My take on it is that business owners’ feelings of satisfaction and success come from intrinsic values such as the satisfaction of being able to employ people and continue to serve customers even in a tough economic environment.  It comes from the confidence of knowing your self-reliance helped you beat back adversity.  That’s what this is measuring.

It’s not about measuring the business owners’ actual financial situation. If you look at business owners’ outlook and expectations for the next 12 months based on how their businesses are doing financially (pulling data from the very same Gallup survey), the picture looks less positive.  Their overall sense of optimism about their future financial picture isn’t as positive.

In other words, as a business owner you can feel a degree of satisfaction and success because your business survived or you haven’t had to lay off employees or because you managed to keep most of your customers, even if economic conditions swirling around you are negative.  You feel satisfied and successful inside because of what you did manage to accomplish in the face of adversity.