Twitter is known for its simplicity, but for brands, simple advertising options aren’t always the most effective. That’s why the microblogging site continues to add more advertising options for brands to build their network and attract new customers. Twitter recently announced that it would add interest targeting features to make Promoted Tweets and Promoted Accounts more relevant to the users who see them. 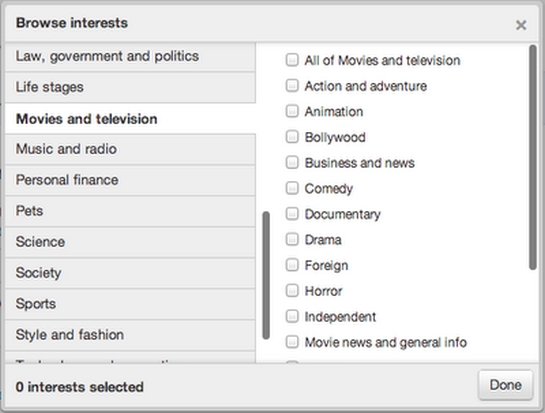 This new addition to Twitter’s advertising repertoire means that brands can choose from a selection of set of topical interests so that they can reach Twitter users who aren’t necessarily connected to current followers, but who have a greater chance of interacting with your tweets.

Using a real-time interest graph, Twitter can automatically send promoted tweets to users who best fit in with a company’s targeting requirements.

Choose from a predetermined list of 350 general interest topics such as sports, style and fashion, and movies and television. Companies can select multiple topics based on what they are trying to promote.

So for example, if you were trying to promote a documentary about a local high school football team, you could target users interested in documentary films, sports, and education.

This option allows brands to specify certain usernames that are relevant to the product, service, or event they’re trying to promote. This feature doesn’t actually let you target that user’s followers, but it does let you reach other users who share similar interests to the username you selected.

So for example, if a band is trying to promote their new album, they can select other bands with similar styles so that they can reach users who have similar tastes in music.

Advertisers on Twitter have been able to target users based on similarities and connections to the brand’s current followers. But brands were not able to specifically target users who tweet about certain topics or other brands or Twitter users until now.

Twitter is hopeful that this new targeting option will lead to increased engagement and results for brands who choose to advertise on the site.