Small businesses now have the option to sell gift certificates directly from their business profile page on Yelp. The local reviews site, which also gives businesses to the opportunity to offer daily deal promotions, tested out the gift certificate feature earlier this year and just announced that it is now available to all businesses using the site. 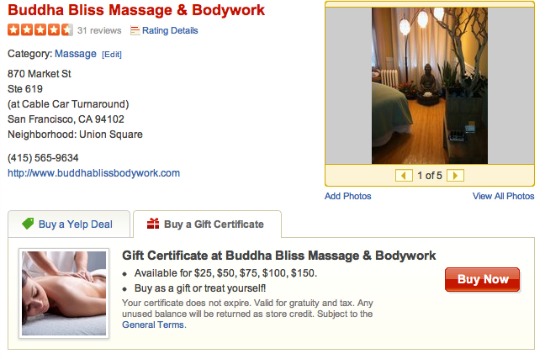 Unlike its daily deal promotions, the gift certificates are not discounted at all. It’s just a simple way for businesses to reach out to customers. For local business owners, a feature like this can make a lot of sense, not only for gaining new customers but also for turning existing customers into loyal advocates.

For instance, some consumers might be less likely to purchase a discounted promotion for a local business if they’re giving it as a gift, since it might be considered tacky. In addition, some of the deals offered on the site were too low to cover an entire product or service, so the customer was still left making up the difference. With the new option, businesses can offer gift certificates in different denominations of their choice, so customers can buy as much or as little as they want.

Yelp, which has about 78 million monthly users, will take a 10% cut of gift certificates sold on the site. But the certificate is full-value for the customer, so if someone wants to buy a $100 gift certificate for their friend’s favorite restaurant, they pay $100 and get exactly that much to spend.

Deals still remain available for local businesses. So between the two options, businesses can reach out to new and existing customers in different ways. Since Yelp is so recognized and widely used by locals in many cities throughout the country, tying in this type of option can make patronizing local businesses even more convenient. And thus, businesses that are already on Yelp could really benefit from offering gift certificates on the site.