Freshdesk Introduces A Help Desk for Mobile Apps With MobiHelp

Mobile app developers have to put in a lot of work to not only create apps, but also to maintain and fix any problems along the way. The problem for many is finding a way to receive customer feedback without negatively impacting the app’s public reputation. That’s why help desk provider Freshdesk developed its new in-app solution, MobiHelp. 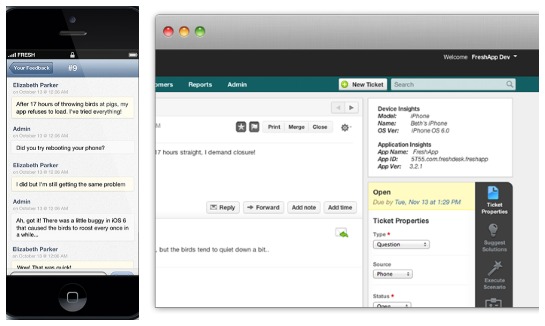 “Today, the most common mechanism to leave feedback is in the App Store. Very few people seek out the app maker to reach out for questions or concerns. They just delete the application and leave a bad rating. Because stars don’t give you much to work from as a developer, we came up with a way to provide users with the ability to offer actionable feedback instead of judgmental feedback.”

MobiHelp serves as an in-app help desk, offering app users an easy way to get in touch with the developer if they have any questions about the app or run into any problems they’d like to report. In addition to giving users a way to reach developers with feedback, MobiHelp also monitors the app for crashes and then sends reports directly to the developer so that they can fix code at the first sign of problems.

The idea for MobiHelp came to the team at Freshdesk about six months ago. The product did go through some beta testing with Freshdesk users who develop apps.

From that testing, Mathrubootham said that users wanted the interface to be simple and uncluttered, focused on having a conversation rather than offering different support tickets, statuses and closing issues.

Freshdesk is based out of Chennai, India and also has offices in Walnut, California. The company also has products aimed at helping companies manage help desk applications and providing customer support online.

MobiHelp is currently free for developers. Setting it up requires adding one line of code that links the app to your Freshdesk account.