The Higher-Ups Want To See You 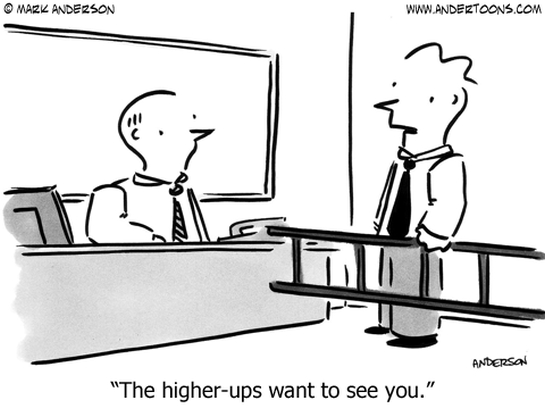 “Higher-ups” was always a term I disliked. If a boss wants to see you, that’s one thing. Management wants to see you? Getting worse. But the higher-ups? Oh boy, you’re in for it, pal.

So with this cartoon, I played with the idea that higher-ups weren’t necessarily something to be concerned about, they were just literally higher up. Maybe they’re really tall? Or possibly up on some sort of raised platform? In any case, a ladder is probably a good idea, and it’s easier to draw than a trampoline.

As a side note, while I was writing this, I came up with an idea for someone in management being summoned by the “lower-downs.” I don’t think it’s going to go well for anybody.