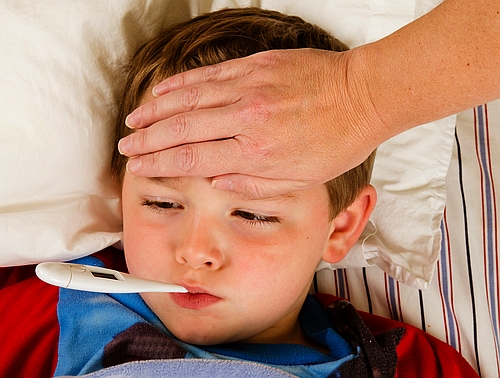 While the East Coast has been suffering wild weather in the past few weeks, here in Southern California it’s been an endless summer. But Fall (and a little rain) is finally here, and with it, comes the cold and flu season. When one of my business partners mentioned in passing that she had a sick child at home, it got me thinking about how much sick children used to affect my staff back when I was an employee myself.

As someone who’s worked with tons of parents of young children, I can attest that kids get sick — a lot. And because sick children can’t go to school or day care, someone has to stay home with them.

What do you do when your employee’s child gets sick?

A recent study by C.S. Mott Children’s Hospital asked parents whose children are in child care how they and their employers deal with sick kids. Nearly two-thirds said there was at least one time, and 38 percent said there were three or more times, when their child couldn’t go to child care in the past year due to illness. In addition, almost one-fourth reported having a child sent home from child care mid-day due to illness.

So what happens to the parents?

Either they have to find other arrangements (maybe a family friend or parent) or they have to miss work themselves. Given that fully half of parents said finding backup care for a sick child is difficult, it’s not surprising that 42 percent of parents with children in day care reported having missed some work in the past year because of a child’s illness. Almost one-fourth had missed work three or more times in that time period.

Some employers are making the sick-child challenge harder than it needs to be. One-third of parents in the Mott study report that it’s hard to take time off work to care for a sick child because they’re worried about losing pay—or losing their jobs. The same percentage say they don’t get enough paid sick time off from work to cover the time needed for sick children. The report cites statistics from the National Partnership for Women and Families, showing that 40 percent of private-sector employees overall, and a whopping 80 percent of low-wage employees, have no paid sick leave.

What are some of the risks to your business, your employees and society when parents don’t have the ability to take time off and care for their children — or when they’re too scared that doing so might cost them their jobs?

First, even if they’re at work, their minds aren’t fully on the job. Some employees in desperate straits might leave kids alone who are too young to be on their own, posing health and safety hazards for the children. Parents who have to take their kids to emergency rooms at night or on weekends because they can’t go to doctors’ regular office hours during the day clog up the emergency health care system and expose their children and themselves to worse illnesses. And, of course, if the kids are sick, their parents are probably carrying germs—and bringing them into your business.

There are many ways to handle employees with sick children. First, I hope you give all your employees some type of paid sick or personal leave. If for some reason you can’t afford to do so, consider at least offering unpaid time off for this sort of situation. Depending on the employee’s job, that might be your only option. But for a growing number of employees, the simple solution is letting them work at home.

Working at home enables the best of both worlds, with employees able to feel confident their children are taken care of while they’re also fulfilling their work duties. When I was an employee, working at home was just starting to take off, but once we were able to use this method, our problems posed by sick children got a lot less onerous. We were able to “go with the flow” and handle most situations by conference call or email.

Of course, I’m not implying that only parents should get this type of treatment. Whatever sick-child policy you put in place, apply it to all your employees (or you could face not only resentment, but lawsuits). Give everyone the same amount of time off and let them use it for their own illnesses, their kids’ illnesses or whatever they want.

As long as their work gets done, that’s what matters, right?

How will you handle sick children this cold and flu season?