The Battered Incomes of the Self Employed

Self-employed people have more variable income than those who work for others, economic theory explains. When times are good, their earnings often rise more than the incomes of those receiving a paycheck. But when times are bad, their pay takes a bigger hit.

The 2010 Federal Reserve Survey of Consumer Finances – a triennial survey of a random sample of American households conducted for the Fed by a University of Chicago-based survey research group – shows the large drop in self-employment income that occurred during the recent economic downturn.

According to analysis conducted by Federal Reserve economists Jesse Bricker, Arthur Kennickell, Kevin Moore, and John Sabelhaus, median income declined nearly 6 percent in real terms between 2007 and 2010 for families headed by a wage or salary worker, but nearly 19 percent for those headed by a self-employed person.

Average income was little better. For households headed by a wage employed person, mean income in 2010 was 97 percent of what it was in 2007, when measured in inflation-adjusted terms. But for households with a self-employed head, it was only 74 percent of its level three years earlier. 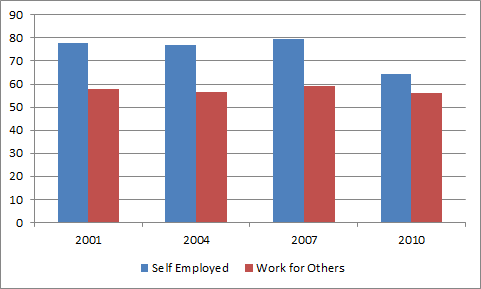 Source: Created from data from the Federal Reserve Survey of Consumer Finances

The economics here are straightforward. It’s not easy for companies to cut salaries. Not only are the size of paychecks sometimes governed by contracts, but companies don’t like risking the hit to worker performance that comes when people see their wages contract.

The self-employed, however, take their compensation in the form of profits – the difference between their revenues and their costs. If their revenues shrink and they can’t cut costs by an equivalent amount, their incomes fall.

While the fraction coming from interest and dividends remained constant, the share coming from wages and salaries, social security, pension, other retirement income and other transfer of income increased.