Security is often a top priority for businesses that own computers and other devices for their employees to use. But now that mobile technology is become increasingly prominent in many workplaces, employees are likely to do work from their own devices, such as smartphones and tablets. Though your company doesn’t necessarily own these devices, they can still contain sensitive and important data that you want protected.

So how do you make sure these devices are secure? 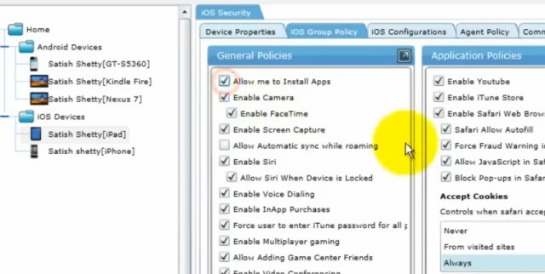 The management platform is built to scale with your business as it grows, giving you security for both mobile devices and apps. And setting it up doesn’t require you to have any major technical expertise or an in-house expert.

The basic Codeproof plan is free for one device. The premium account costs $2.99 per device per month or $29.99 per device per year. Once you’ve signed up, you simply enroll your devices by providing your Codeproof account information within the app.

You can log into the management console on your desktop or any other device and find real time data about the security of all devices and apps in your network. The system updates you if it detects any security threats such as malicious apps or jailbroken devices. And you can even check your overall system health and stats like most common apps or most recently downloaded apps.

In the photo above you can see a list of all the devices enrolled for “XYZ Corp.” the mobile policy manager page shows all the devices by name and type. On this page, you can choose a device or group of devices and set configurations and policies meant to enforce security. For example, you could hide the camera or FaceTime apps or restrict in-app purchases on certain devices.

The idea of mobile security is still so new for many small businesses that it is often overlooked entirely. And since its such a growing part of many workplaces, keeping an interest in these devices, whether company-owned or employee-owned, is becoming an essential part of protecting company assets, data, and other resources.

Codeproof is based in Redmond, Washington and was founded last year by Satish Shetty, who formerly worked for Microsoft and McAfee.