If you are the sole owner of the average Subchapter S Corporation in manufacturing, finance and insurance, or wholesale trade, the President of the United States thinks you are rich.

According to data from the Internal Revenue Service’s (IRS) Statistics of Income, the average S Corp in these three industry sectors had annual net income of over $250,000 per year in 2008, the latest year data are available. 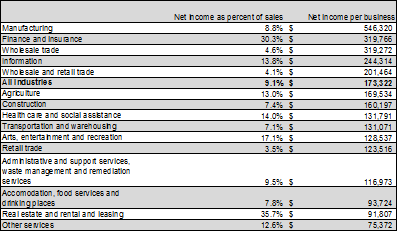 Source: Created from data from the IRS Statistics of Income

While far from a majority of small businesses or their output, S Corps comprise 13 percent of American businesses and 18 percent of revenues and net income, according to data from the Internal Revenue Service’s (IRS) Statistics of Income.

Like all types of small businesses, the profitability of S Corps varies substantially by industry sector. As the table above shows, the average S Corp generated just over $173,000 in 2008. However, average net income ranged from $75,372 in other services to $546,320 in manufacturing.

Interestingly, across industries, the average annual income of an S corp is not related to income as a percent of sales. Across 76 industries (not shown in the table), the correlation between the fraction of sales that net income comprises and annual net income per business is only 0.09. That means that there is virtually no relationship between the two numbers.