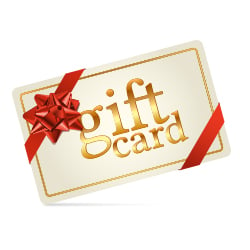 The holidays are a time for giving – we all know that. But what’s a small business owner to do when margins are thin, times are tough, and employees are deserving of appreciation for a year’s hard work?

A kind word and a pat on the back are nice, but who are we kidding? It’s a material world, money talks, and if this article is any proof, platitudes are easy to throw around.

That’s where gift cards come in. Gift cards have been the most popular type of holiday present for seven consecutive holiday seasons, and more than 80% of people want one this year, according to the National Retail Federation.

The popularity of gift cards among consumers isn’t the only thing that should make them intriguing to small business owners, though. After all, iPads and Justin Bieber are both pretty popular too, and you’re most likely not going to give them to your employees this year.

So, here are a few of the other reasons why small business owners should be pro-gift card:

From 2005 to 2011, we didn’t use roughly $41 billion in gift cards, according to Tower Group, and another $2 billion-worth are expected to go unredeemed this year. The fact that so many people have perfectly good gift cards lying around has sparked a booming secondary market for them. You can buy popular gift cards through online gift card exchanges at discounts of up to 80%.

In other words, you can either project greater liquidity by giving more valuable gifts at a lower cost or simply spend less than you had originally planned.

They Can Easily Sell it or Re-gift it

The fact that you can sell gift cards for cash or just turn around and pass them off to someone else makes them a more versatile type of present than the standard knickknacks and clothing that are disseminated at holiday Secret Santa parties.

Even if you miss the mark and get someone on your staff a card to a store they hate, they’ll still have something to show for it.

We’ve all received presents in which we simply have no interest, and they inevitably end up lost or in the trash. You could make the case that the same is true of gift cards, but can you put a few ties or jars of homemade jam together to buy one of those aforementioned iPads? Probably not.

Your employees could, however, combine a few different gift cards to purchase that big-ticket item they really want but will never get via a standard company gift giving program.

Small business rewards credit cards generally give you the option of redeeming for gift cards. When you do so, you tend to get more bang for your buck relative to redeeming for a statement credit or merchandise since issuers have partnerships with major retailers.

That means your rewards portfolio could actually be your gift giving budget this holiday season.

Help Co-workers Learn About One Another

The most common knock against gift cards is that they’re impersonal, but there’s no reason they have to be. Encourage employees to create gift card wish lists (basically maintenance-free lists of their favorite stores, which can be shared via Facebook or e-mail), and everyone can garner a better understanding of what makes their compatriots tick.

That could increase office morale and pay dividends in 2013 and beyond.

With all that considered, a small business holiday gift giving strategy should be taking shape in your mind. Whether you want to do a spin on Secret Santa and anonymously distribute wish lists amongst employees or handle all the gift giving yourself, it’s clear that this holiday season will be a more festive, rewarding, and inexpensive time for all involved.

If that doesn’t spread holiday cheer, I’m not quite sure what will (aside from some extra paid time off, of course).

Odysseas Papadimitriou is a personal finance expert whose views are regularly mentioned in many major publications. He is the founder and CEO of Card Hub, a leading U.S. credit card and gift card portal, as well as Wallet Hub, the first personal finance social network.
5 Reactions
Subscribe
Follow @smallbiztrends
RSS LinkedIn Pinterest iTunes