Report on the BlackBerry 10 Launch: What it Means for Small Business Productivity 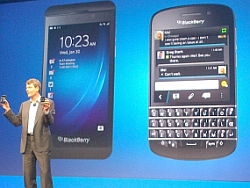 BlackBerry today officially launched its new BlackBerry 10 smartphone platform  in a 6-city simultaneous launch – complete with a celebrity (Alicia Keys, who has been named Global Creative Director) in attendance.

One of those launch cities is New York, and Ramon Ray, founder of SmallBizTechnology.com, attended the launch and provided this live report, including his analysis.

The promise of the BlackBerry 10 for small business productivity

BlackBerry has launched two new phones. The Z10 has a virtual touchscreen keyboard.  The BlackBerry Q10 has a physical keyboard.  (Read a review of these new phones on ABC News.)

Indeed the biggest challenges for BlackBerry are two-fold.  First, will consumers and business users buy it?  Second,  will there be enough apps on this platform?

Based on this first look, BlackBerry 10 appears fresh and innovative.

A version of the above article and image (showing BlackBerry CEO Thorsten Heins and the new BlackBerry Z10 and Q10) was originally published on Smallbiztechnology.com and is included here with permission.