Digg Has a New Advertising Option for App Developers

The content discovery engine Digg just announced its first new advertising offering since the site’s major redesign over the summer.

The advertising product is called “Apps We Like,” and requires developers to submit their mobile or Web apps for consideration before including them on the site. The online application requires some basic company info, along with advertising budget, and why Digg users would want to know about the app. 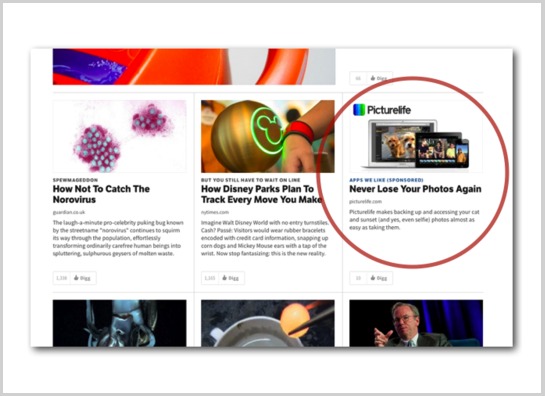 If the Digg team feels your app is something the site’s users should know about, you’ll be given the opportunity to purchase ad space at a price to be determined after applying.

Paid promotions will be labeled as “sponsored,” and can appear on Digg’s homepage as well as its iPhone and iPad apps. The photo above shows an example of a sponsored post within Digg’s homepage content.

It comes as a surprise to very few that the site is looking to begin its monetization efforts. And the new app advertising product presents an interesting opportunity for developers to get the word out to potential users about their mobile or web apps.

Since the sheer number of mobile apps available is overwhelming to many consumers, the apps that aren’t featured at the top of the app store or similar venues are often overlooked. This new product gives developers and companies that offer apps to reach more potential users. And since the ads have to be selected by the site in order to be featured, there’s a higher likelihood of reaching consumers who might actually be interested and a smaller chance of users being bombarded with millions of “apps we like” so that the section becomes overlooked altogether.

Betaworks acquired the core assets of Digg in July and promised to turn the company “back into a startup” with a small team based in New York City. The company also stated that the site’s user base has doubled since the takeover in August.

However, the Digg team stated in a blog post that the site is still only about 1% done with the project of revitalizing Digg, and that in fact they will never be fully finished. So users can expect the site’s advertising options to continue evolving over time, likely with many more options to choose from.