Online videos have been used as a promotional tool for businesses for many years. And mobile technology has more recently become just as essential for many types of businesses. So it was just a matter of time before these two types of tools fused together to give mobile consumers access to the same videos and information as those using more traditional devices.

Now, YouTube is giving mobile app developers easier ways to incorporate videos into their applications through its Android API. 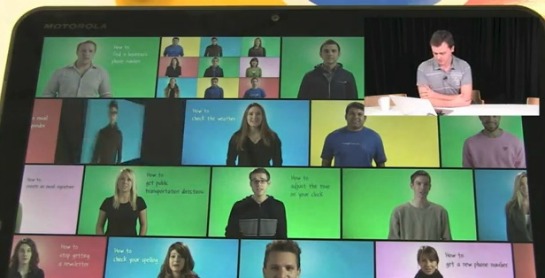 Android app developers can load or cue videos into a player view, which is then embedded into the application’s user interface. Developers can program the playback options, such as play, pause, or skipping to a certain point in the video or playlist.

The API was first announced at this year’s Google I/O event, and is being launched on an experimental basis now, though it isn’t expected to change much going forward.

The photo above shows a “video wall,” which is one example of what you can create using the YouTube API. In this example, the developer would put many different components of the app together on one page, and then one of the thumbnail images would flip over and turn into a video. There are more simple options as well, such as embedding one simple video into a basic app page.

Since so many consumers and professionals alike are spending more time on mobile devices and less time on traditional computers, it’s important for mobile apps to be able to support the same types of media that people are accustomed to.

This new feature simply makes it easier to integrate YouTube videos into Android applications, which can help developers create more in-depth and media-centric apps. Depending on your business type or your purpose for creating an app in the first place, this type of feature could certainly be helpful in getting a message across to users and customers.