The Rise of Entrepreneurship In Chennai, India 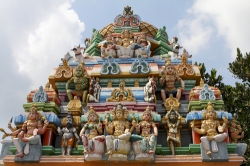 Once known as the Detroit of India because of its automobile industry, Chennai is getting much of its current economic growth from the information technology sector. Chennai has a highly literate population and the availability of skilled technical talent at a reasonable price-point, over time, has attracted many multinational companies to set up their operations in the city.

The more interesting story, however, is the rise of entrepreneurship in Chennai, a relatively new phenomenon. Below are three that have done particularly well.

I visited Chennai in March 2011 as part of a speaking tour. During that visit, TiE Chennai hosted a 1M/1M roundtable. Freshdesk, a local company, was part of the group that presented. So was Innovation Labs. Let me first talk about these two companies.

Today Freshdesk has become a kind of Salesforce.Com for the customer service industry.  It is a software-as-a-service (SaaS) company that provides small and medium businesses with on-demand customer support software that offers multi-channel social support. Small- and medium-business owners can set up online customer support platforms that combine the backend help desk system used by agents with an online customer portal on the front end.

Freshdesk was founded in 2010 by CEO, Girish Mathrubootham and CTO, Shan Krishnasamy. Before starting Freshdesk, Mathrubootham worked as a vice-president of product management and Krishnasamy as a technical architect for the Manage Engine Division of Zoho Corporation. Zoho, by the way, is a major success story from India that today does over $100 million in revenue, and has most of its product development operation in Chennai.

Mathrubootham got the idea for Freshdesk from a post in Y Combinator’s Hacker News, which talked about how a major player in the space had become too expensive for smaller companies. That’s when he decided to take advantage of the opportunity to provide small businesses with credible customer support software. Mathrubootham funded the company with money from his own savings. In addition, the founders raised $25,000 each from two friends as a convertible note with another $25,000 commitment on the way in July 2011.

In the two years since its inception, Freshdesk has raised two substantial rounds of funding. In October 2011, the company raised $1 million in a Series A round from Accel Partners. In April, Accel Partners stepped up again, teaming with Tiger Global Management to offer Freshdesk $5 million in Series B funding.

While Freshdesk does compete in a mature worldwide market, the advent of cloud computing has created a wealth of opportunity. What sets Freshdesk apart from its primary competitors, ZenDesk and Assistly, is that Freshdesk has built a well-rounded solution with multiple incoming and outgoing support emails, multiple support portals, a different support group for each brand, support for separate forums, solutions for each brand, and a separate knowledge base and community platform.

Another company from Chennai that has lit up the high tech space is Invention Labs. They make an app for tablets (iPads and Androids) that helps autistic children learn language and communication through pictures.

Local entrepreneur Ajit Narayanan was approached by Vidya Sagar, a large NGO in India that works with children with special needs. The NGO had been following the development of assistive technologies for non-verbal children and they were noticing that there were devices that were being used in the US on a regular basis. These devices cost more than $5000, which was unaffordable for most Indian children. They wanted to know if he could invent something that would do the same thing at a much lower cost.

In 2009, Invention Labs introduced their own tablet, called Avaz. While it received a good deal of commercial and critical success, bringing out a niche product in low volumes at a low cost was a challenge. Once iPad and Android hit the market, Ajit knew immediately that he must create an app version of Avaz.

Avaz is now available as an app for the iPad and Android platforms, priced at $99. A typical use for Avaz would be a therapist evaluating a child with autism and determining that Avaz would help in speech and language therapy. Then the child’s parents purchase Avaz (or, in some cases, the school district pays for it). The app is used in therapy sessions and gradually becomes a part of the child’s life.

The child uses Avaz to communicate outside class, in academic environments, and eventually everywhere. Using Avaz also helps a child with autism develop language skills (i.e. they are able to understand new words and use them in novel contexts), and the ability to communicate removes a lot of frustration and the behavior issues associated with it.

Avaz is now the number one speech assistive device/app in India, and is quickly becoming a favorite app of speech therapists in the USA, Australia and Europe as well. Nearly all therapists who have seen Avaz go on to recommend it to their clients, and thereafter, they see real, tangible progress in the speech and language capabilities of the children they work with. Avaz has received very positive reviews from a number of experts in apps for children with disabilities, and is also the only app in its segment to have a 5-star rating on the iTunes App Store.

While Chennai is behind Bangalore in entrepreneurship, it is at the forefront of special education in India, and has institutions that work with children with special needs that are renowned internationally:

“This is a huge advantage for us, because it helps us try out our product’s working very closely with our target market, before we take it to a broader field through the app store. The incredible community around disability in Chennai helps us validate our assumptions and flag potential problems.”

Ajit Narayanan was named on MIT’s TR35 list of transformative young inventors. Avaz also received the National Award for Empowerment of People with Disabilities from the President of India in 2010. This is India’s highest award in this space.

A platform-as-a-service company, OrangeScape was founded in 2003 with the intention of simplifying business application development. The company gained traction with the help of a Chennai manufacturing company for which OrangeScape built an HR application. Slowly but surely, the company grew, and in 2009 earned its first $1 million in revenue.

What caught my attention was OrangeScape’s proven ability to plug a distinct gap in Google’s enterprise solution. As you know, the Google productivity apps portfolio is getting very good traction within enterprise, and we’ve heard from various CIOs who are moving from Lotus Notes or Microsoft Exchange to Google’s Office suite. One of the primary drivers of the switch is cost. A second is collaboration.

Currently, when enterprises switch to Google’s productivity suite, they still need to make provisions to move the large portfolio of homegrown long tail productivity apps that have been developed around the previous system, such as Lotus Notes or Microsoft Exchange. And in comes the Google App Engine as Google’s offering in this context.

Well, it turns out that porting long tail productivity apps to Google’s App Engine is a somewhat cumbersome job, and requires a lot of custom development. Building new apps is also not as simple.

Enter OrangeScape. The long tail apps can easily be ported to or developed on Google App Engine in a third of the time and cost using OrangeScape as an application platform. Voila, the entire productivity suite of an enterprise can become cloud-ready, quickly, efficiently, and cost-effectively!

Orangescape has raised funding from the Indian Angel Network, and has since launched additional SaaS products.

Lastly, I want to discuss a company that is substantially larger. CaratLane is a local jewelry business that has leveraged the ubiquity of ecommerce to grow its business.

Mithun Sacheti is the founder of CaratLane, an online jeweler in India and one of the country’s leading ecommerce companies. He grew up in the jewelry industry and prior to founding CaratLane, he opened new stores for his family business throughout the southern regions of the country.  He moved to Chennai and built a store that became a well known local business.

But the stores had limited inventory and could only sell so much. They started to sell people diamonds based soley on the gem’s specifications:

“I realized that people were willing to put some time into understanding diamonds so they could make better choices. With that in mind, I went to my friend and co-founder and told him that I felt there was a business opportunity here.”

(If this reminds you of the US-based BlueNile, a $300 million+ company, it should.)  Fast forward a few years, and we have a Chennai e-commerce startup doing over $15 million a year.

These four companies are just the tip of the iceberg in Chennai’s growth in the technology entrepreneurship sector. Things are developing well, and even amidst the relatively conservative culture of the city, people are taking risks and succeeding.  It’s an encouraging trend.

Sramana Mitra is the founder of One Million by One Million (1M/1M) initiative, a virtual incubator that aims to help one million entrepreneurs globally to reach $1 million in revenue and beyond. She is a Silicon Valley entrepreneur and strategist who writes the blog Sramana Mitra On Strategy.
16 Reactions
Subscribe
Follow @smallbiztrends
RSS LinkedIn Pinterest iTunes