Consumers and business professionals alike are becoming increasingly reliant on mobile technology. This means that mobile-centric social networks are becoming increasingly popular. So while businesses might want to stick to professional platforms to create and share media or promotional items, mobile-centric platforms can potentially provide wider access to target consumers while simultaneously saving time and money.

For example, Instagram has become a pretty useful promotional network for many businesses, mainly due to its ease of use for mobile devices and its vast network. Now, a handful of new apps are emerging that hope to provide a similar platform for mobile videos. 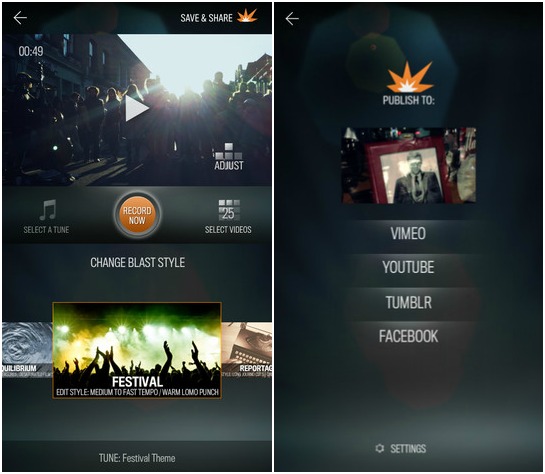 Since videos offer a more in-depth look at a subject, certain types of businesses could find such a platform even more useful, provided it can build a large enough network to make it worthwhile.

FrameBlast has recently emerged as a simple, free video app that gives users the ability to record, edit and share videos.

The app gives users some editing capabilities as well, such as adding music and Instagram-like visual adjustments. And once videos are completed, users can share them with their network on other social platforms such as Vimeo, YouTube, Tumblr, and Facebook.

The photo above shows some of the editing capabilities, such as video adjustments and music selection, as well as recording additional clips. It also shows some of the sharing options available for finished videos.

FrameBlast is owned by Clearer Partners, which is a UK-based media studio that offers a lot of experience in online video. The team has worked on creative film projects for The BBC, Joost, UK Parliament, and more over their 50 years of combined experience in the professional media industry.

Some of the other mobile video sharing apps that have emerged, such as Viddy, have a much simpler approach that allow for single clips and limited editing capabilities. Simplicity can certainly be a plus for consumers, but for professional businesses that want to share more in-depth mobile videos, FrameBlast is probably worth a look.

The app is currently available for iOS devices, but FrameBlast is reportedly working to launch Android and pro versions soon.