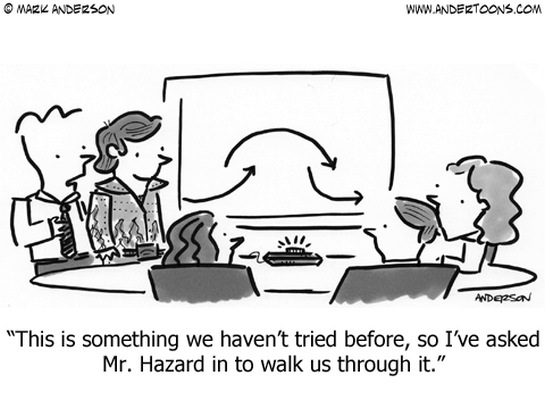 What does a daredevil look like? Well, there’s the sparkly outfit, probably a wide collar, big belt buckle, some big hair… but is it enough?

Originally, I’d also had the caption reinforcing it with something like:

“…so I’ve asked this daredevil in.”

But I thought maybe that was too much.  So I gave him a dangerous name instead.

I was feeling pretty proud of myself when my wife walked in and said:

“So is he from the Dukes of Hazzard?”

Ugh, she was totally right. The name was confusing.

But by that point the cartoon was done.  Even though it would be a quick fix in Photoshop, once I’m done with a cartoon, I like to be done with it.  So I’m left with this imperfect cartoon.

But his hair looks awesome!