Microbusiness Economic Trends: Into the Future 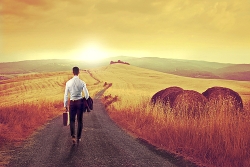 I never thought I’d hear myself saying this — or see myself writing this — but I do believe I have reached the point at which I have said everything I have to say about microbusinesses … sort of.

Before I sign off permanently, I want to summarize, and at the same time offer you, my view of where the microbusiness trends of the last fifteen years seem to be taking us.

The disapproval of the policymakers and the economists has had no discernible effect on the numbers. As the technology has developed to increase productivity beyond the wildest imaginings of the last century, barriers to entry in many industries evaporated. Microbusiness population numbers gauge reaction to the developing technology.

Nonemployers led the charge: those single-person businesses increased in population by 29% between 1998 and 2010 (the most recent year for which we have complete numbers), compared with 2.7% growth in employer numbers over the period.

There is relatively little research on small businesses in general, and even less on microbusinesses, so it has been difficult for anyone to get a grip on their evolving role in the overall economy. What little we know, however, seems significant.

We have seen that they tend to weather asset-based economic downturns, like the 2002 recession, fairly well and can even reduce the impact on the labor market. That, in turn, causes the recession to be shorter and the trough to be shallower and easier for the economy to climb out of.

In addition, to the extent that microbusiness owners (and, particularly, nonemployer business owners) create jobs for themselves whenever they launch such a venture, it can be said that they improve the health of the labor market.

As a matter of fact, I think it makes sense to view the microbusiness phenomenon as a labor market trend. A large number of microbusinesses, possibly most of them, fall into the category independent contractors — part of the contingent workforce. It is a segment of the workforce that is gaining in size and strength, their increasing popularity a function of the cost savings they offer their client businesses.

The businesses will like the arrangement and so will the contractors. The governments won’t and it will be both interesting and instructive to note what, if anything, they decide to do about it.

From the point of view of microeconomic theory, the microbusiness phenomenon makes little sense. So many of them (especially the nonemployers) make so little money that it seems doubtful they are even covering their marginal costs, even in light of how little it can cost to run a nonemployer consulting firm or virtual publishing company. And yet, these little businesses are not fly-by-night, ephemeral entities.

Clearly, people who launch and operate microbusinesses gain more from their enterprises than mere money. It may be difficult to quantify that fact and insert it into a production function equation but it also means that microbusinesses, as a firm size class, aren’t going anywhere.

As nonemployers become a larger portion of the workforce, they will increasingly become of a force that must be reckoned with.

As microbusinesses become a larger portion of employer businesses, as non-micro small firms grow ever fewer in number, and as firms of all sizes trend smaller, policymakers will need to rethink their fiscal policy strategies for job creation and retention.

And economists are going to have to stop complaining about the inefficiencies of microbusinesses and start figuring out where they fit in the big picture.

Even more fundamentally, microbusiness ownership is poised to have major impacts on life in these United States — not just economically but culturally and socially. This is a shift that, in retrospect, will be as huge as the changes brought about by the Industrial Revolution. Microbusinesses are changing the way we work and that is changing the way we live.

It’s difficult to overstate the significance of that.

Leaving for the Future Photo via Shutterstock