Small Business Owners: The IRS Says You Are Tax Cheats 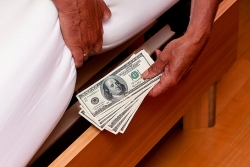 Small business does a lot for America, accounting for roughly half of private sector GDP and employment.

Their cheating is substantial. The IRS reported that the United States Treasury faced a tax gap – the amount it was owed less what it was paid – of $385 billion in 2006, the most recent year data are available. The largest chunk of this gap – $122 billion – is unreported business income on individual income tax returns.

But just as we shouldn’t look at the Pew Foundation survey and think that more trustworthy people become small business owners than politicians, bankers, ministers or college professors, we shouldn’t look at the IRS figures and conclude that dishonest types start companies. Small business owners aren’t less honest than the rest of us. They are just better able to get away with cheating on their taxes.

People don’t under report their wages because their employers report their earnings to the IRS. Knowing that, the IRS knows what’s in your paycheck keeps most people from lying about the amount they are paid. Therefore, only 1 percent of wages go unreported.

By contrast, the IRS has no idea how much cash sole proprietors are taking in. That’s why the IRS estimates that a whopping 56 percent of sole proprietors’ cash receipts are not disclosed to the tax authorities.

The IRS doesn’t think checking up on most small businesses is worth their time. While they regularly audit giant corporations like Apple or General Motors, coming through the records of a bunch of tiny companies doesn’t yield enough unpaid taxes to justify the costs.

A small business owner earning $155,000 per year faces an average tax rate of 20.5 percent, the nonpartisan Tax Foundation tells us. If the IRS catches the business owner under reporting income by 25 percent, that yields only $7,800 in lost income. Therefore, it’s not surprising that the IRS audits only 1 percent of taxpayers earning less than $200,000 per year, but 12 percent of those earning more than $1 million.

Moreover, the IRS knows that a chunk of small business under reporting isn’t deliberate. It comes from the difficulty of figuring out what one actually owes. Fear of punishment might motivate small business owners not to purposefully misstate their income, but it does little to help them calculate the right numbers under a maddeningly complex tax code.

Whatever the combination of causes, a recent New York Times article summed up the outcome succinctly. The best way to cheat on your taxes is to “run your own company. More specifically… be the sole proprietor of a Schedule C business.”