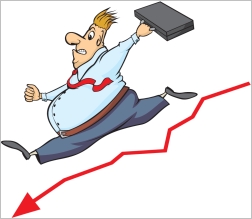 In 2020, a smaller fraction of Americans will be in business for themselves than currently, a new report released by the Bureau of Labor Statistics (BLS) shows. Between 2010 and 2010, the BLS predicts that the self-employed fraction of the labor force will shrink from 6.3 to 5.9 percent.

This decline is part of a long term downward trend in self-employment. Back in 1948, 12.8 percent of the non-agricultural labor force was engaged in unincorporated self-employment, Steve Hipple, a BLS economist has shown.

As I have said, declining self-employment is a natural trend as economies develop. It occurs in part because of something I call the “Walmart effect.” Because of the efficiencies of scale, Walmart replaces a lot of small, independent businesses. The end result is fewer people running their own businesses and more working for someone else.

The pattern contrasts with the 2000 to 2010 period where the economy lost 3.2 million workers, 400,000 of whom were self-employed. During that period the patterns were more similar for those employed by others and those self-employed, causing the fraction of self-employed to shrink only from 6.4 percent to 6.3 percent.

That’s also very different than what happened from 2000 to 2010 when over 500,000 secondary self-employed left the labor market, resulting a 3 percent annual rate of decline.