Facebook just announced a new feature to its Messenger mobile apps that allows users to send social voicemails to their friends.

The update for iOS and Android Messenger allows users to send voice messages up to one minute in length to their contacts within a message thread. To use the feature, you just need to press the “record voice” button on the message thread page, which is shown on the right of the photo below. Then you can record your message and send it to your contacts. 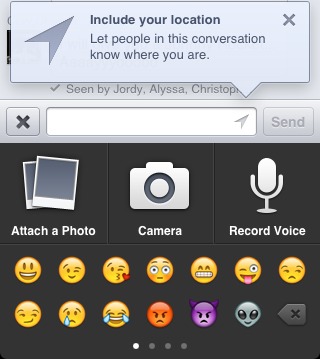 While there are already plenty of ways to reach others for voice communication, whether it be online services like Skype or Google Talk or simply sending a traditional voicemail message, this feature could still provide some value for both business and personal users, or at least one more option.

Since there are certain things that are more easily explained or communicated through voice and other things that are more easily explained through text or visuals, having different formats available within one channel could certainly prove to be useful. So with this new feature, users have the ability to use text, photos, maps, and now audio to communicate with team members, collaborators, or others who might share business interests.

You might ask what sets the Facebook Messenger app apart from others like Voxer or Whatsapp, which offer similar voice capabilities. Facebook’s user base is clearly larger than what you’ll find in most other communication apps. So while it might not be your first choice to use for daily internal communication, it could be a worthwhile feature to consider for communicating with all the other people you speak with over the course of running a business.

In addition to this latest update, Facebook is also testing a feature that provides free voice calling to Messenger users in Canada. The feature is expected to become more widely available later in the year.