Since Twitter launched its Vine mobile video app in January, many users including brands have signed up to create six-second looping videos to share with their social networks. But since the platform is still so new, it may seem difficult for brands and businesses to measure exactly how their creations on the Vine app are received and how they might impact current and potential customers.

Now, free analytics report provider Simply Measured has released a new tool to help brands make sense of all the noise surrounding Vine. The analytics report shows which Vine app users are interacting with your videos, as well as your brand’s top influencers, and how your network engagement on Vine compares with engagement on other social platforms. 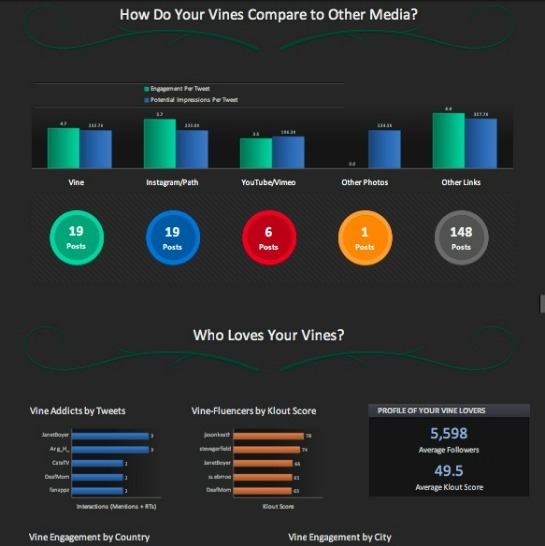 The photo above shows a sample user analysis, which includes the amount of posts your brand has made on Vine and other media such as YouTube and Instagram, and how the engagement on each of these platforms stacks up against the engagement your brand receives on Vine. It also shows your brand’s top followers and influencers, based on interactions with tweets that contain Vine videos.

Twitter’s Vine app is still a very new tool that brands are using to reach social audiences, so there haven’t been many ways for these brands to actually measure engagement and figure out if posting these six-second clips can actually be worth it. But analytics tools like this one have become a big part of social media strategies for many companies that use other social media platforms, so it was only a matter of time before such tools became available for Vine app users as well.

Simply Measured was first introduced in 2010 and has helped to track more than 173,000 social media profiles on various sites including Facebook, Twitter, Instagram, YouTube, and more.  The different free reports offered by the company can cover anything from followers to traffic sources. The analytics tool for vine is the Seattle-based company’s newest offering, launching just about a month after Vine app debuted in the app store.