If you think that banks are less interested in lending to small business than they used to be, you’re right. In 2012, only 29 percent of all non-farm, non-residential, loans were less than $1 million, a Federal Deposit Insurance Corporation (FDIC) proxy for small business lending.

Data from the FDIC, which keeps records of bank loans to small businesses, shows that small loans (less than $1 million) to business have been a decreasing fraction of all bank loans for the past decade and a half. 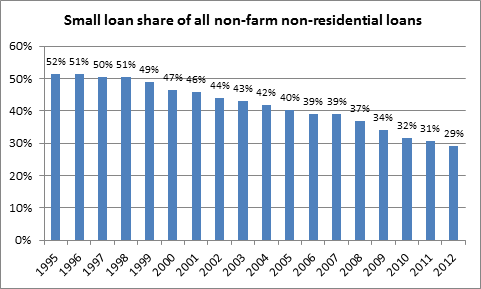 As the figure above shows, the rate of decline in the small loan share accelerated in 2008 and 2009, suggesting the impact of the financial crisis. But the decline had clearly started much earlier than 2007.

Because banks began to shift away from small business lending well before the financial crisis and Great Recession, post-2007 changes in the small business finance system aren’t the most likely explanation for the decline.

So what is? I don’t know, but the experts have offered a couple of hypotheses.

First, over the past fifteen years, banks have dramatically increased their securitization of loans – packaging of loans into bonds that can be sold to third parties. Small business loans are not easily securitized because the terms of the loans are heterogeneous and different banks have different underwriting standards. As a result, the desire to securitize might have led banks to reduce their small business lending relative to loans that are easier to package into securities.

Third, the banking industry has become more competitive over the past decade and a half. This competition has led banks to focus on their most profitable loans. Bigger loans tend to be more profitable than smaller ones because revenues tend to increase faster than costs as loan size increases. Because bigger loans are easier to make to bigger companies, increased competition may have led banks away from lending to small businesses.

Scott Shane is A. Malachi Mixon III, Professor of Entrepreneurial Studies at Case Western Reserve University. He is the author of nine books, including Fool's Gold: The Truth Behind Angel Investing in America ; Illusions of Entrepreneurship: and The Costly Myths that Entrepreneurs, Investors, and Policy Makers Live By.
26 Reactions
Subscribe
Follow @smallbiztrends
RSS LinkedIn Pinterest iTunes