Over the past several years, countless project management and productivity apps and services have launched. Many have failed or fallen into obscurity, some are still around and fighting for more customers, and new ones are still launching regularly. But one project management platform that has stuck around and remained relevant since its launch in 2004 is Basecamp.

Now, the platform is launching its first official iOS app to help its users manage projects from their mobile devices without the use of third party apps. 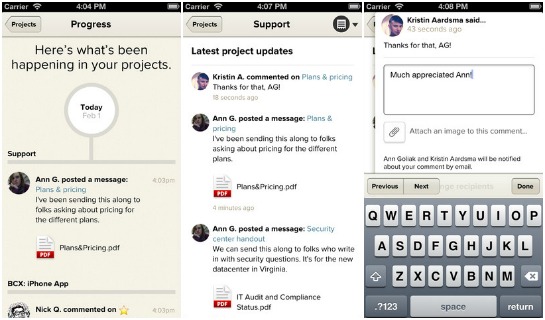 From the app, users can check on the progress of each of their projects, discuss updates with other team members, post comments and upload files, as shown in the photos above.

Though the platform has already been available on the mobile web and through third party apps like Lodge and Everest, the availability of an official application can help users ensure they’re getting a quality app with full access to their Basecamp projects.

Basecamp has made a couple other changes in the past year, including a complete redesign of its web app and a new app called Basecamp Personal that allows for users to manage personal projects instead of just business projects.

Basecamp continues to offer the option to use its original version, Basecamp Classic, for those who have older browsers that don’t support the new version or just prefer the older one for whatever reason. However, the official iOS app only supports projects run on the newer version of Basecamp.

Basecamp is run by 37signals, which also runs contact management app Highrise and group chat app Campfire. Basecamp was first launched on the web in 2004 and has helped users manage over 8 million projects to date.