The prevalence of crowd-funded projects has grown considerably in the past year, as has mobile technology and the need for more and more brands to offer their own mobile apps. Now, those two ideas have been merged by the formation of a long-awaited app.

The popular crowd-funding platform Kickstarter launched its first ever iPhone app this week to help mobile consumers find and support worthy startups and projects, as well as help creative entrepreneurs access and post updates about their project’s success. 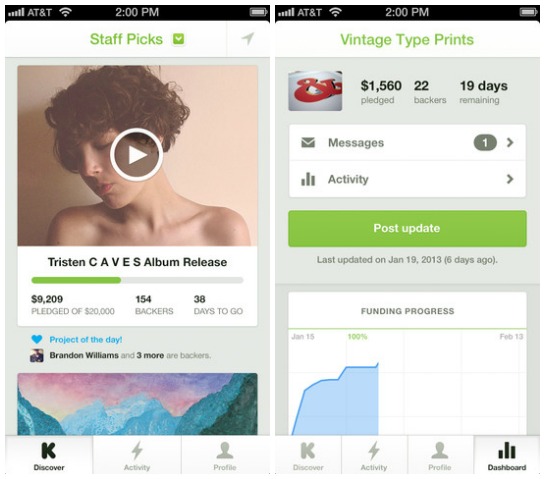 The mobile app works a lot like the web version. Users can browse through the extensive list of projects, support and follow relevant projects, watch and upload videos, and receive updates from project creators. And creators have the option to receive updates about pledges and keep their supporters updated on any news or other relevant information.

The photos above show how users can browse through different categories, such as Staff Picks, to find those relevant to their interests. It also shows a project page, which includes how much money has been pledged so far, as well as messages and other activity.

While you basically have access to the same features using the web version of Kickstarter, the ability to stay updated about your project’s progress from any location could prove to be a valuable feature, as well as the ability to post photos and videos from your mobile device.

Previously, a few unofficial apps such as Kickstarter Projects and Kickstarter Mobile were available to help users browse projects, but this is the first official offering from the company itself. And since the company hasn’t yet released an Android app, some of these third-party apps will likely still get a lot of use.

Kickstarter first launched in April 2009 and has helped fund more than 35,000 creative projects. Entrepreneurs trying to launch everything from tech gadgets to music and film ventures have used the platform to get the necessary funding to help their projects get off the ground. In 2012, Kickstarter successfully funded 18,109 projects with $319,786,629 pledged by 2,241,475 people.