What Happened to the Recovery in Small Business Sales?

Sales at the average small business, which had been trending upward from their nadir at the end of the Great Recession, turned south in February 2012 and declined during the better part of 2012, data from Intuit reveals.

Drawing on information from the users of its Quickbooks online financial management service, Intuit has measured small business sales since 2004. In the figure below, I have plotted the inflation and seasonality adjusted revenue of the average small business from the start of the Great Recession until the end of December 2012. The figure clearly shows that the recovery in small business sales has reversed over the last year. 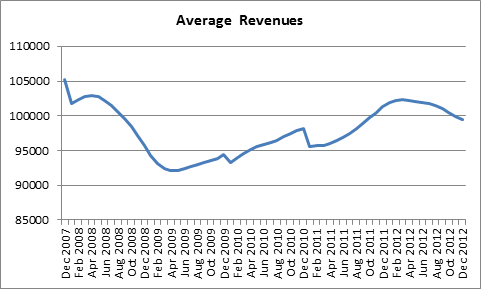 But Susan Woodward, an economist with Sand Hill Econometrics, who helps Intuit interpret the data, told me that increased competition isn’t a likely explanation. Average income, she pointed out, stayed high even though average revenue was falling.

So I asked her what she thought was the explanation. She offered a provocative hypothesis. She said:

“I can’t rule out ACA [Affordable Care Act] as a force.”

In response to the law, she continued, business owners:

“. . .have substituted other resources for employees, maybe even have lower revenues, but manage to keep the same income.”

What do you think explains falling sales at the average small businesses in 2012?