If you use Skype for Windows 8 to connect online with voice, video, and chat for your business, you may have been frustrated by the inability to share files on the new app thus far.

However, all that changed Friday as Skype finally rolled out file sharing as a supported feature for its Windows 8 application.

In an announcement on its Garage & Updates blog, Skype said the new feature, missing from Skype for Windows 8 since it was introduced five months ago, was added in response to customer demand.

We’re listening to our users, and file sharing has been one of the biggest features they’ve been asking for in Skype for Windows 8.

The photo below shows how a file transfer appears within a Skype for Windows 8 chat window. To send a file, users select someone to share files with, tap their icon and tap “send files.” Then select a file to share and it will appear in the other user’s chat window. 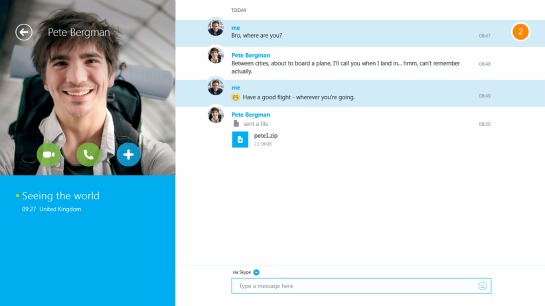 Skype’s desktop software already allowed for users to share files with their contacts, but those who use Windows 8 and its applications have had to wait for this feature to become available. Skype for Windows 8 is an app that is specifically optimized for Windows 8 touch screen devices and is always on, so that users can send and receive messages. However, Windows 8 users still have the option to use Skype for Windows desktop if they so choose.

Certain versions of the product are loaded with features like screen sharing and other collaboration functions, but others are still catching up.

Skype for Windows 8 works basically the same as the Skype desktop software does, so users can send documents and other types of files while chatting with or calling contacts.

For the business owners and professionals who use Skype to keep in touch with clients and colleagues, this is a clearly useful feature that can make collaborating on documents and projects or sharing presentation materials much easier.

In addition to the file sharing feature, the new update also includes improved application performance and stability. This means that the start up and loading of content should take less time.

Skype has said that it is working on adding all of the features available on Skype’s desktop versions to Skype for Windows 8, and that users will be notified when the new updates become available.

Microsoft launched Skype for Windows 8 in October, 2012, shortly after the release of Windows 8. The new Skype represents a completely redesigned product in order to work with the Windows 8 system on both computers and tablets, not simply a tweak of previous versions. Skype 1.5 for Windows 8 can be downloaded directly from the Windows Store.