There was a recent report highlighting the fact that the legal sector will never return to its pre-recession heyday. The report was jointly produced by the Center for the Study of the Legal Profession at Georgetown University Law Center and Thomson Reuters Peer Monitor.

Too many lawyers, chasing not enough work, and pressure  from clients to provide discounts have become a fact of life in the current market.

In fact, because of the high unemployment, law school applications are on pace to hit a 30-year low. Since the recession, the fraction of new J.D.s finding a full-time job requiring a state bar license dropped from 74 percent down to less than 60 percent, according to data compiled by the National Association for Legal Placement. 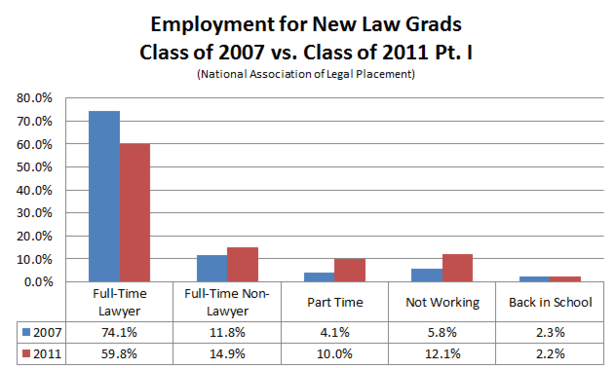 Now to be fair, this is not to say that ALL firms are sinking. Quite the contrary.

Still, the legal sector is undergoing major changes. And these changes are HUGE lessons for the smart business owner. So what can small business owners learn? Namely:

Cybercriminals Are Real, Defend Against Them

President Obama recently issued an executive order designed to get the government and private companies working more closely to protect the nation against cyber attacks. Cyber attacks on U.S. businesses have increased dramatically as hackers look to steal financial and intellectual assets from computer systems.

The smartest cyber criminals have even figured out that the best way to get what they want is to avoid the target corporation entirely and aim straight for their law firm. According to Mary Galligan, special agent in charge of cybersecurity for the FBI:

“We have hundreds of law firms that we see increasingly being targeted by hackers.”

Why? Well, the truth is, most law firms aren’t very technologically saavy. Most small businesses look at their business and say, “I’m small. No one wants to attack little ole’ me.”

But sophisticated hackers attack in either one of two ways:

Bottom line, invest in your cyber security. Use:

People Want Accountability, Give It To Them

Because of the recession, many clients are fed up with the billable hour. Many experts agree the system itself is fundamentally flawed.

Some law firms are starting to see the value in simply offering flat fees. According to Kyle Westaway, a social enterprise attorney:

“There is a new model of the practice of law, and it’s about applying lean startup principles and challenging the old norms of the billable hour, command-and-control structure at a price that’s more approachable, lacking all the extra added bloat.”

It’s a smart move considering the amount of LPOs and other alternative legal service providers taking away clients. Your customers are smarter than they’ve ever been. Be real with them, be transparent and be accountable. They’ll reward you for it.

Your Competitor Is A Potential Partner, Befriend Them

Some law firms are outraged that LPO’s are taking away clients- even major U.S. law firms are scrambling. While most are outraged there are a few firms that are actually partnering with the LPO’s to win businesses. One Washington, D.C. firm is bringing in LPO representatives to pitch meetings to demonstrate how it can do the work at lower costs than other traditional firms.

Truly smart business owners understand the power of strategic partnership. If the cost sharing and economies of scale work, if there’s up-selling or cross-selling potential, if both products or services complement each other and if there is a good non-disclosure and non-compete agreement in place – why not turn your foe into a partner?

There Are People Just As Capable As You, Develop Them

In a study by consulting firm Altman Weil Inc., it was found that most in the legal sector are slow to implement succession plans. Unfortunately, without that transition in place, firms could “face expertise gaps and ultimately could lose clients.”  This is even more significant as the study points out, 30 percent to 40 percent of practicing lawyers in the U.S. and Canada are starting to retire.

Succession planning often takes a backseat to the daily operations and hassles of running the business.

How much of a backseat?

According to a global survey of 1,300 companies by Korn/Ferry, though 98 percent of companies believe a CEO succession plan to be important, only 35 percent currently have one in place. And 49 percent haven’t had one in place for the last three years.

Don’t make the mistake of waiting too long. Find those “now” leaders (people who can take over immediately if need be) and make sure they’re not a carbon copy of you. Develop them to replace you. The time to do this is now.

Is there anything else we can learn from this changing industry?

Mike Holmes is in Market Development for Marathon Consulting, a New York based information technology firm that aims to help business owners stay focused on their business, not on their network. Feel free to connect with Mike on any of his social media channels.
5 Reactions
Subscribe
Follow @smallbiztrends
RSS LinkedIn Pinterest iTunes