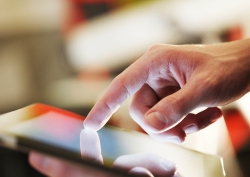 You know the importance of a business tablet as your company becomes more mobile.

But the question persists: Which tablet will give you the best performance for your investment?

A recent survey of information workers gives an answer you might not expect.

Best Business Tablet May Surprise You

Launched Feb. 9, Microsoft’s Surface Pro has met with lack luster response, but several aspects of the new mobile tablet might explain its appeal and why small business owners might also want to give these devices a second look.

First, the Surface Pro includes Microsoft Office software, long the standard in business. This makes it appealing to companies large and small.

Second, Apple has a reputation for doling out its innovations incrementally. This could be bad news for companies seeking a business tablet as a good investment for long term use.

As Shwetika Baijal observes in PolicyMic, Apple didn’t include a front-facing camera in the first iPad in 2010, although the company included the camera feature on its iPhone 4 released just two months later.

Baijal suggests Apple made the conscious decision to withhold the feature from the first iPad even though the company likely already possessed the capability. She suggests the decision is part of a business strategy intended to keep prices and demand high for each new model.

While the recent survey suggests the Surface Pro may be more in demand with enterprise users and so perhaps an investment to think about for small business owners too, challenges remain.

Mary Jo Foley of ZDNet reports Microsoft failed to take orders for the new device ahead of time and in some cases sent insufficient numbers to retailers to meet demand.

Baijal says other obstacles are the Surface’s lack of apps, about 10,000 compared to the iPad’s 300,000+, and the unfamiliarity of the new Windows 8 operating system.

In a review in The Wall Street Journal, Walt Mossberg calls the Surface Pro heavy and expensive. (It weighs two pounds and starts at $899.) But Mossberg also points to another feature that may appeal to business users. The Surface Pro is able to operate like a conventional laptop, even though it is considerably more portable. But it also runs Microsoft’s new touchscreen tablet interface, making it a hybrid of both devices and a versatile choice for a business tablet.