As depicted in this women owned businesses infographic, women small business owners are feeling decidedly optimistic about 2013, with 81 percent feeling upbeat about their businesses’ prospects for the coming year, reports a study by Web.com Group Inc. and the National Association of Women Business Owners (NAWBO).

Not only are women entrepreneurs feeling good about their own prospects, a whopping three-fourths are positive about America’s economic outlook, says The 2013 State of Women-Owned Businesses Survey. 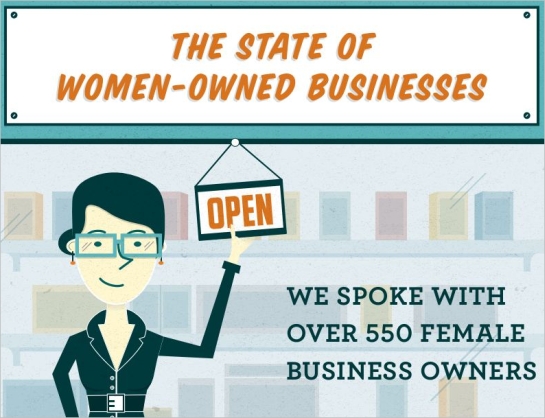 So What Has Women Business Owners Worried?

Not a whole lot.

Just 36 percent are concerned about taxes or finding good employees.

Instead, women business owners are charging full steam ahead, with 93 percent planning to invest more or the same in hiring this year as they did in 2012. As they move forward in their businesses, women entrepreneurs aren’t hurting for money. Some 78 percent say they didn’t look for financing last year, mostly because they didn’t need it.

You see it reflected in how women business owners are looking for customers. They’re embracing modern tactics such as social media and search engine optimization with open arms. Nearly half believe that traditional channels like print advertising are becoming less and less important.

In addition, 73 percent plan to spend more on marketing this year than they did in 2012 – more indication of their upbeat attitude.

Not only are women business owners feeling optimistic about their futures, they’re also feeling positive about women-owned business in general. Some 85 percent believe that more women will start businesses in 2013 than ever before.

As to why they’re launching businesses, it’s not out of fear or the inability to get a good job. Instead, most women say they started their businesses because they wanted to follow their vision (28 percent) or had a great business idea (21 percent).

So often, surveys about women-owned businesses paint a picture of caution and hesitation, with women business owners second-guessing themselves or holding back out of worry and fear.

I’m happy to see a survey that reflects the attitude of most of the women business owners I know – embracing the future and making the most of it.