Bookselling giant Amazon announced late last week that it is acquiring Goodreads.  The purchase price was not revealed. The transaction is expected to close later this year.

Book lovers know Goodreads as the large and increasingly popular book-review site with a strong  social element.  At Goodreads you can review books, discuss books, and connect with other readers based on mutual interests. Goodreads says on its website that it is  “the world’s largest site for readers and book recommendations.”  Based in San Francisco, Goodreads has 16 million members and 23 million book reviews.

One of the plans is to make Goodreads integrate with Kindle.  Goodreads CEO Otis Chandler will report to Amazon’s Vice President of Kindle content, Russ Grandinetti — a telling clue to where Goodreads fits in the overall Amazon strategy.

Goodreads will be run as a separate subsidiary of Amazon, much like Zappos.  A concern among Goodreads users is whether the review site can maintain neutrality toward other retailers, once it is part of the Amazon family.

I logged on this morning to my Goodreads account and noticed that one of my 700+ friends there posted this message – she’s clearly not happy with the Amazon takeover: 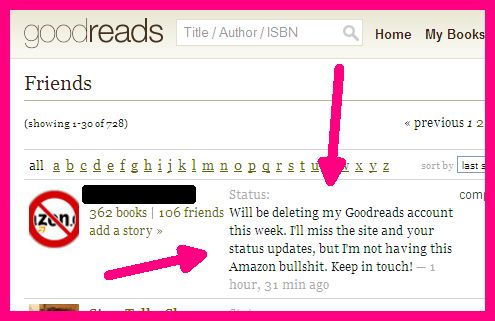 While some will surely make similar gestures, the announcement is unlikely to cause a mass defection immediately.  People don’t like to switch apps, and as I point out below, there aren’t many Goodreads alternatives that offer the same social community and ecommerce-platform independence.  The real impact will depend on what Amazon does with Goodreads over the medium and long term.

Up to now Goodreads has been seen as independent of any particular retailer.  In an interview on Paid Content, Goodreads CEO Otis Chandler reiterated his desire for that retailer-neutral element to remain.

However, that decision will not be up to Chandler alone.  Autonomy has a way of going out the window after a while, in most acquisitions.  Amazon has shown intolerance when it comes to using its data in sites that give visibility to competing retailers.  Goodreads itself discovered that last year, causing it to stop using the Amazon API.

Chandler said that Goodreads would continue to offer its own API.  The API gives third parties access to certain Goodreads data.

Entrepreneur authors of business books have caught on to Goodreads as another place to develop an audience for their books.  When I first joined the site two years ago, it had a decided focus on fiction books.  But in the past year I’ve noticed business books being reviewed and discussed more frequently there — and more business authors joining.

Goodreads encourages authors to connect with fans and develop a following, through its Author Program.  Authors can have blogs, and host giveaways and Q&As on the site.  There is a self-serve advertising program — and thousands of book clubs on the site to tap into and connect with.

For those concerned about Goodreads becoming part of Amazon, there are some alternatives.

Shelfari is not one of them.  Amazon acquired Shelfari in 2008.  Once promising, Shelfari seems to have been eclipsed by Goodreads.   Of course, Shelfari never had as strong a social element as Goodreads.

LibraryThing is another reader site with an Amazon connection.  Abebooks, which is owned by Amazon, has a 40% stake in LibraryThing. LibraryThing’s website says it has 1.6 million book lovers as members.

Google Books, through Google Play, offers a book app that combines the ability to purchase, store and review books.  The Google Books app on my Nexus 10 tablet has a simple elegant interface. Goodreads reviews are incorporated into Google Books as one review source (along with some other sources).  It’s not clear whether that will continue.  But Google is ramping up its own social review capabilities.  When you leave a review on Google Books it ties in with your Google+ account, so that your connections on Google’s social network can see what you think about a particular book, and vice versa, as the notice below indicates.

Bookish, a joint venture of three publishers (Hachette, Penguin Books and Simon & Schuster) was launched just this year.  It is an e-commerce site but also gives users their own book shelves.  As you might imagine with a site owned by publishers, Bookish appears to be focused on presenting and selling books from a publisher’s perspective, and promoting their big-name authors.  The community interaction element seems limited.

And then there are dozens of book apps – each seems to offer some different combination of features.  Some are ebook readers tied to specific retailers (like iBooks, Nook and Kindle) that also allow you to keep track of your electronic books that you’ve purchased, but typically offer little in the way of social interaction and discussion around books.

Book Crawler and ReadMill are two iOS book apps independent of any retailer and popular with readers.

Kobo, headquartered in Japan, also has its own bookstore, tablet readers, and free reader apps.

If you know of others, please share in the comments below.