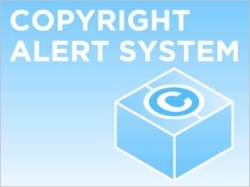 The founders of a system created to cut down on Internet piracy assure us it won’t catch small businesses in the crossfire. For the most part that’s probably true.

But if you run a home-based business, you might just want to be aware of this new system because there are circumstances under which it might impact you. And business owners will of course want to know how this system may affect their families.

The recently launched Copyright Alert System (CAS), is an anti-piracy plan that some have called the “six strikes” system.  By design it focuses on consumers. It is intended to help stop downloads of pirated, copyrighted works such as films and music.

But small companies that are run from home using a residential ISP account to connect to the Internet, could find themselves in the crossfire if the owner, someone in their home or in their employ uses their Internet connection to download pirated material.

How The Copyright Alert System Works

The Copyright Alert System was established by something called the Center for Copyright Information (CCI).  That’s an innocuous sounding name, but the Center is more than just a think tank or a website providing information. The Center is really a joint policing effort of groups such as the Recording Industry Association of America (RIAA) and Motion Picture Association of America (MPAA).  They’ve been joined by 5 major Internet service providers here in the United States – AT&T, Cablevision, Comcast, Time Warner Cable, and Verizon.

Last week the group gave a series of public presentations available on CSPAN to explain the Alerts system, at the Congressional Internet Caucus.  Essentially, groups like the MPAA have people go out and participate at P2P (peer-to-peer) sharing sites — also called torrent sites.  According to Marianne Grant, Senior Vice President of the MPAA, when these people see a copyrighted work being shared, they verify it and report it to the ISPs.

In turn the ISPs notify the consumer or may take other action.  The nature of the notices or actions varies, depending on whether it’s a first occurrence or repeat occurrence, and depending on the ISP.  But in general terms, here is how it works:

Ars Technica has an image of what a Copyright Alert looks like, this one from Comcast.

Small Business Supposedly Not Part of the Alerts System

The Center for Copyright Information  has said that public Wi-Fi providers such as coffee shops and other small businesses will not be impacted by the new plan, contrary to some previous reports.

Jill Lesser, Executive Director of the CCI, wrote in a statement on the group’s website that businesses and organizations providing legitimate open Wi-Fi connections (such as coffee shops) have specific business connections, not residential connections.  Therefore, they are not part of the CAS network, so they should not receive notices based on customer activity.

However, in her statement, Lesser was more specific about how some very small businesses might be affected by the new system:

“Depending on the type of Internet service they subscribe to, very small businesses like a home-office or a local real estate office may have an Internet connection that is similar from a network perspective to a residential connection. In those cases, customers are assigned Internet Protocol addresses from the same pool as residential customers. The practical result is that if an employee of the small business, or someone using an open Wi-Fi connection at the business, engages in infringing activity, the primary account owner would receive Alerts.”

The CAS has received a lot of criticism from consumer rights groups and others.  Critics claim it violates privacy rights by giving ISPs access to user activity and the ability to penalize them. However, CCI has put some consumer safeguards in place. For example, consumers are allowed to challenge alerts they believe were sent in error.  The following video  explains the Alert System in more detail.