The Business Administration recently released the 2012 Small Business Economy, its statistical report on small business. Because the report provides the latest available data on several key small business statistics, its publication provides me with an opportunity to update five charts that I have published at various times in various places, including Small Business Trends.

Employer Firms Continue to Shrink as a Fraction of all Businesses 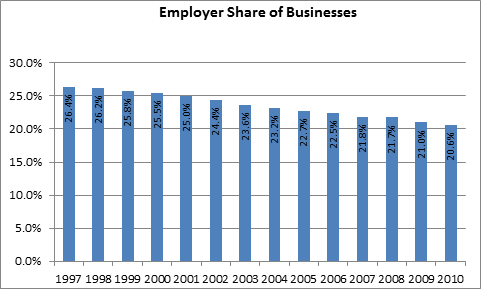 As the figure below shows, small business employed a minority – 49.1 percent – of private sector workers in 2010, down significantly from the 54.5 percent it employed in 1997. 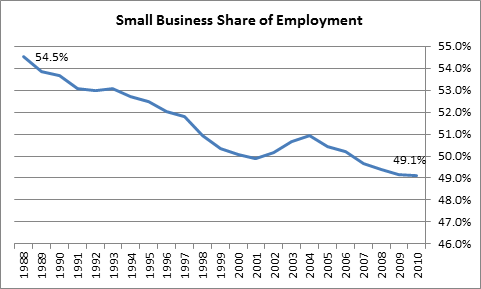 The Number of Employer Firms Per Capita Continues to Decline 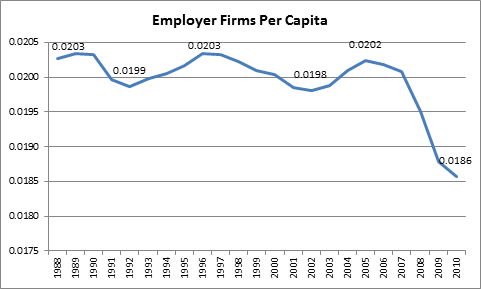 Employer Firm Formation has Stabilized, Though at Below Pre-recession Levels

As the figure below shows, the number of new employer firms founded per thousand people edged up from 1.70 to 1.73 in 2010, after having declined significantly from 2006 through 2009. 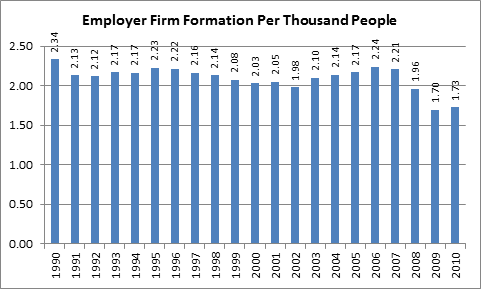 The latter had been trending downward since the mid-1990s, after remaining largely flat between the early 1970s and mid-1990s.

Scott Shane is A. Malachi Mixon III, Professor of Entrepreneurial Studies at Case Western Reserve University. He is the author of nine books, including Fool's Gold: The Truth Behind Angel Investing in America ; Illusions of Entrepreneurship: and The Costly Myths that Entrepreneurs, Investors, and Policy Makers Live By.
13 Reactions
Subscribe
Follow @smallbiztrends
RSS LinkedIn Pinterest iTunes