How to Use Facebook Custom Audiences to Target Your Market 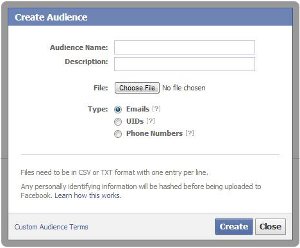 Businesses have certainly taken to Facebook. According to Dan Levy, Director of Small Business at Facebook, there are over 15 million business pages on Facebook as of early March 2013 — that’s an increase of 2 million more just since December 2012.

Business have also taken to the advertising options on Facebook, too.  Over 500,000 pages have used Facebook’s Promoted Posts in the company’s fourth quarter with 30 percent of those being new advertisers and 70 percent being repeat customers.

Recently the company has also introduced a new way for advertisers to target their market beyond their immediate Facebook followers.

Facebook Custom Audiences allows businesses to reach customers who aren’t yet connected with them through social media.

Advertisers begin by visiting the Facebook Ad Manager page and downloading the Power Editor to get started.

Use of the Chrome browser is necessary to make the editor work.

Once in the Ad Manager, an advertiser selects “custom audiences.”

When a box like the one above appears, the advertiser can then upload email, phone, or user ID lists to create a custom audience of existing customers.

Brick and mortar retailers can use Custom Audiences to market to repeat customers. Though the business may have a Facebook fan page, “likes” on that page don’t necessarily reflect those who visit the business regularly.

But if retailers have a method of collecting phone numbers or email addresses from regular customers who buy at their physical locations, they now have a method of targeting these real customers directly on the world’s largest social network.

Online businesses can use a similar approach. “Likes” collected on Facebook may not be the same as the people visiting company’s website regularly. But by collecting emails from these visitors, the business can then use Custom Audiences to target them directly on Facebook, even if they’ve never “liked” the company’s Facebook page.

Import LinkedIn Connections and Other Lists

Jake Hower of the Multimedia Marketing Show explains how to import LinkedIn connections and other lists into Facebook’s Custom Audiences feature.

The social site has partnered with digital marketing companies Datalogix, Epsilon, Acxiom, and BlueKai to further fine tune the service.

Facebook will now be allowing businesses working with any of these marketing companies to use data they collect to further customize marketing campaigns using the Custom Audiences feature. See the recent Facebook Studio post for more details.

TechCrunch recently reported that even businesses not working with one of Facebook’s new partner firms will be able to use new customer data uploaded to the site.

Facebook says it will set up predefined categories like customers interested in buying a car, luxury fashion buyers, and more for any small business marketers to use.