Google+ surprised people by suddenly making cover images much larger on the social network.  Cover images are the big wide image at the top of your Google+ page. They will now be a HUGE  2120 pixels by 1192 pixels.  That is much wider and taller – previously the dimensions were 940 x 180.

Another change: profile avatars that appear superimposed over cover images have gotten smaller and have moved.  They used to be square on the right side.  Now they are on the  left side, and appear round.

The announcement was made by Googler Sara McKinley on (where else?) Google+ last week.  The changes include several other enhancements:

– An easier way to edit your info. The ‘About’ tab now consists of separate cards (like Story, Places, and Links) — each with its own prominent edit link. As always: you can share specific fields with specific circles, or keep them just for you.

– Bigger cover photos, with a better aspect ratio. Cover photos are much larger than before (up to 2120px by 1192px), and they display in 16×9 when fully expanded. This way more images can be used as cover photos, and there’s more room for your selection to shine.

By default, the cover images will not show completely. Only the bottom part will show unless the visitor scrolls and extends it.

Even so, the cover image takes up most of the space on many displays.  Below is an example.  On a 17-inch laptop, essentially that’s all one can see of the person’s Google+ profile when you first land on the page.  None of the posts show unless you scroll down the page: 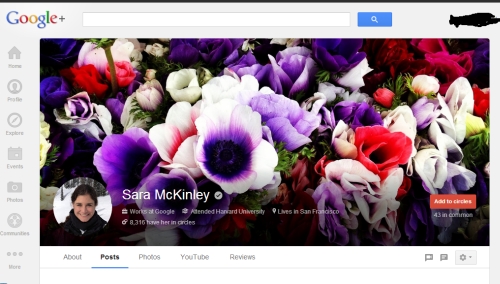 It means you probably have to change your cover image.  If you had carefully chosen five images for a collage as your  cover, to convey just the right impression — it’s back to the drawing board.

Businesses are likely to have designed a special cover image for their Google+ business pages.  Now those cover images will have to be redesigned  or rearranged.

For instance, for BizSugar (one of our sites) we strategically laid out our cover images so that the large square photo avatars covered an empty spot on the right.  Now that the profile avatars are on the left, they are obscuring part of the cover image verbiage and there’s an unintended blank area on the right.  We have 3 different cover images that we rotate  from time to time.  All our cover images will have to be redesigned now.

Also, creating a cover image for a business just got trickier.  With the cover image being so large parts of it may get cut off on some browsers and devices.  Asif Rahman has some helpful information on how to determine the “logo safe” area of your business’s cover image. You don’t want your logo to be obscured.

If you have been using one of those default cover images, this is a good reason to ditch it. Use a personalized cover image.  The cover image is now so large it makes a powerful impact.

Reaction so far has been mixed. You can see that from the comments on McKinley’s Google+ post. Many people love the new size. On the other hand, numerous people are annoyed at having to change their images. Others think the larger images hide the content.