Receive Feedback for Your App Prior to Release With PreApps

The amount of mobile applications available continues to grow exponentially each year, but a relatively small amount of these apps actually reach some level of success. Many feel that to fix this problem, developers may need to either find a way to improve the quality of their apps before launching them or find a way for their apps to reach a larger audience – or better yet, both.

Those are some of the issues that Boston-based startup PreApps aims to solve. The PreApps site offers a place for developers to share their apps with consumers before releasing them to the Apple App Store, Google Play or other public marketplaces. 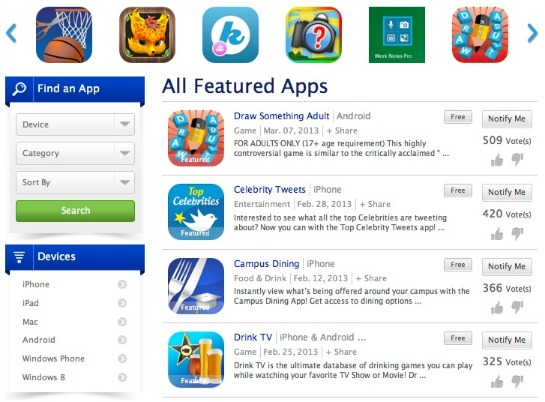 According to PreApps’s Founder and CEO Sean Casto, it gives developers access to potential beta testers beyond just family and friends. So that they may attempt to build a following and receive feedback to improve their apps before releasing them publicly and risking negative feedback.

“It’s like Kickstarter except for feedback, not money. Once an app goes live, app developers get feedback through the comment section on the App Store.  Unfortunately, a couple of bad reviews can send your app to the bottom of the rankings, giving it a destiny of obscurity.”

To submit an app, developers can sign up for a free PreApps developer account, then create an app profile. There are four different posting options for developers to choose from:

Paid options offer more visibility for apps on the site as well as some additional features like surveys and polls.

The photo above shows a selection of featured apps. Users can search for different apps based on device and category. They can then sign up to become a beta tester or sign up to be notified when the app is officially released.

Each app also has its own page on PreApps, which include a lot of the same items as the app pages in Apple’s and Google’s app stores: longer description, screenshots, pricing and videos or other descriptive media. There is also a section for comments so that beta testers can leave quick feedback or suggestions.

Casto said that he knows first-hand how hard it can be for independent developers to break into the App Store, since he has been developing his own apps for about two years:

“I wished that there was some way that you could promote your app prior to its release to a wide net of people without having major marketing dollars. That’s how I came up with the idea for PreApps.”

The site officially launched at the end of January and Casto has been pleased with the response from both developers and testers thus far. In addition to the mobile app testing platform, the company also offer some additional services such as app development, icon creation, demo videos and press releases.

Since developers have the option to post for free and testers can sign up for free, these services could likely become a key source of revenue for the company.