Supreme Court: You Bought It, You Own It, You Can Resell It 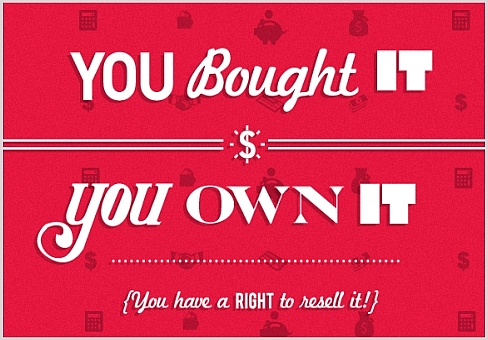 This past week the United States Supreme Court decided a case that reinforced the right to re-sell something that you had lawfully bought.

Now — you might be wondering what’s so earth shattering about that.  After all, hasn’t that always been true?  You own an iPad and want to get a new tablet instead?  Just sell the old iPad or donate it or recycle it — because it’s yours and you can do what you want with it.  Bought a book and no longer need it? You sell that, too. Right?

Here in the States we have something called the “first sale doctrine.” It simply means that once a tangible copyrighted work (or something with copyright in it) is sold lawfully the first time, the original copyright owner no longer has rights over the physical item. After that, the buyer can do whatever he or she wants with it — sell it again, donate it, whatever.  That’s why you can legally hold a yard sale or sell computers on eBay. The resale right applies only to the physical item sold, not copies.

Most of us take resale rights for granted.

But that right to resell copyrighted items had been challenged in court.  The Supreme Court’s decision this week reaffirmed that owners have resale rights, as Daniel Fisher writes in Forbes:

The U.S. Supreme Court today settled a long-simmering debate over the Copyright Act by holding that publishers can’t prevent the resale of books they produce overseas in U.S. markets.

The decision in Kirtsaeng v. John Wiley & Sons is a victory for Supap Kirtsaeng, a student who was fined $600,000 for importing Wiley textbooks from his native Thailand, where they were cheaper, and selling them in the U.S. It’s also a victory for libraries and retailers like eBay, who argued the “first sale” doctrine — giving owners of published books and recordings the right to sell them to whomever they want — should apply to imported works as well as U.S. publications.

The lawsuit related specifically to U.S. copyrighted items manufactured outside the United States, but re-sold or disposed of inside the U.S.

The Owners’ Rights Initiative hailed the decision as a victory for individuals, organizations and businesses.  The Initiative is an advocacy group founded to protect owner’s rights to buy and sell authentic goods.

Their motto is: “You bought it. You own it. You have a right to resell it.” (Image above)

The Owner’s Rights Initiative says you should be permitted to resell something you’ve legitimately purchased, no matter where it was manufactured.  While the court’s decision puts to rest one attack on resale rights, the group believes  there could be other legal attacks in the future.  Said Lauren Perez of the American Free Trade Association, in a video on the Owner’s Rights site:

If you buy it you own it. If you paid for it, it’s yours. You shouldn’t have to go ask permission of anybody to resell it.  You shouldn’t have to worry about being sued for copyright infringement because the original copyright owner or manufacturer doesn’t like you being the person reselling it… doesn’t want you to realize a profit from your original investment.

The Owner’s Rights Initiative is backed by groups  like eBay, Etsy, Overstock, the American Library Association, the Computer and Communications Industry Association, and even the popular used/out-of-print bookseller Powell’s Books.

Below is the Supreme Court’s decision (only the 4-page summary, also known as a syllabus):

This article was updated to clarify that resale rights do not apply to copies illegally made of a copyrighted item.

Anita Campbell is the Founder, CEO and Publisher of Small Business Trends and has been following trends in small businesses since 2003. She is the owner of BizSugar, a social media site for small businesses.
96 Reactions
Subscribe
Follow @smallbiztrends
RSS LinkedIn Pinterest iTunes