3 Sales Lessons From The Presidential Election 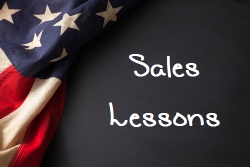 Another U.S. Presidential election campaign has come to a close and the political analysts and statisticians have sifted through the results and the data. Many interesting trends and facts have shaped our understanding of why Americans voted the way they did.

This analysis is already being used for the next election in 2014. For those of us in the sales business, the presidential election can teach us a lot about how to motivate people, how to close the deal and how to make the most efficient use of customer data to help nurture sales leads.

Below are a few lessons from the U.S. presidential election that sales people should take to heart

Sales Lessons From The Presidential Election

Reward Your Most Loyal and Enthusiastic Customers

The reason is simple: By rallying the base, political campaigns can get their most dedicated supporters to give money, volunteer and spread the message of the campaign on social media in a way that will hopefully reach more voters than television ads could.

In the same way, sales people need to constantly build relationships with existing customers. Who are your most loyal customers? These are your organization’s “base,” those more likely to refer you to their friends and colleagues. Instead of trying to constantly introduce your company to new sales leads, who might not know anything about you and might be hesitant to take your call, you might get better sales results by “rallying the base.”

Reach out to loyal customers who have bought from you before (and who have referred you to others).

Back to Basics Tactics Often Bring the Biggest Results

There is a new book about the surprisingly successful tactics of presidential campaigns called “The Victory Lab,” which discusses how some of the most “old fashioned” and mundane campaign tactics can have the biggest results.

For example, two of the ways that have proven most effective at boosting voter turnout are personal door knocking and phone calls from volunteers. Not robo-calls or television ads. There are many parallels like this between the worlds of politics and sales. Many sales people get caught up in technology and rely too heavily on their customer relationship management system and other tools.

While technology is important, one of the biggest ways to ensure sales success is to keep doing the mundane. The less exciting work of dialing prospects and setting up appointments and working through the sales cycle.

In the 2012 presidential election, both the Obama campaign and Romney campaign were trying to reach a narrow sliver of undecided voters. These two “brands” were basically competing for the same tiny pool of “customers,” trying to close the deal on election day.

One of the most important tasks for each campaign was to conduct internal polling and tracking to make sure they were targeting the right voters. It does no good for a campaign to spend money and time talking to voters who were already going to vote for the other candidate. Accuracy in the collection and analysis of this “customer data” is one of the most underrated aspects of the modern presidential campaign.

In the same way, sales people need to make sure they understand their own customer data by focusing on the right metrics and analytics. Just like a campaign has internal polling that helps them focus attention on the right voters, your company needs to identify the most promising prospects at each stage of the sales cycle. So you don’t waste time, effort and resources trying to sell to people who aren’t ready to buy or who aren’t the right fit.

In many ways, sales is a more forgiving business than presidential politics. There is not just one “winner” in sales. Even if you fail to close the deal with a customer today, you can make up for it tomorrow.

But there are many lessons that sales people can learn from the results and process of the 2012 presidential election: rally the base, get back to basics on your sales tactics and use technology and data analysis to focus your efforts on the right sales prospects at each stage of the sales cycle.

Al Davidson founded Strategic Sales & Marketing, Inc. in 1989, where he helps deliver B2B lead generation and appointment setting solutions for clients around the world. Under his leadership, the company has generated over 7 million sales leads, resulting in millions of dollars to his clients.
One Reaction
Subscribe
Follow @smallbiztrends
RSS LinkedIn Pinterest iTunes