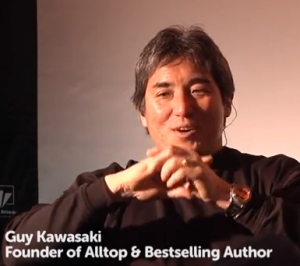 Guy Kawasaki, the famed Silicon Valley venture capitalist and  entrepreneur, has just been named the new board advisor for Writer.ly, a startup online marketplace for writers and the publishing industry.

Writer.ly, which debuted in late 2012, is a website where writers can assemble a team they need to publish and market their books.

On the site, writers can sign up for a free account. They build their own profile and post biddable job requests for a copy editor, book designer, ebook specialist, book marketer, and other professionals.

Professionals can find work on Writer.ly.com by bidding on the jobs that writers post.

Kawasaki made his name first at Apple, and then by becoming an investor in tech ventures. Along the way, he became a best-selling author.  His “Art of the Start” published in 2004 is still one of the most all-time-popular startup books, according to our statistics here at Small Business Trends.

Recently Kawasaki has become an advocate and leading voice for writers in a dramatically shifting publishing industry.  It’s no longer your father’s publishing industry, where traditional publishers rule the roost.  Today, publishers pay smaller up-front advances. They invest less in marketing, except for a handful of books. Thus, it’s up to the author to market the book.

More books are being published today.  Often they are self-published with authors intentionally bypassing traditional publishers.  Another key trend is a surge in popularity of ebooks, with some authors choosing to publish in ebook-only format.  And increasingly authors are trying out new techniques to market their books, such as marketing heavily through Facebook as Kawasaki did with his book “Enchantment.”

Kawasaki calls this role of the author being in control and publishing on his or her own, as “artisanal publishing.” In an interview here at Small Business Trends last month, Kawasaki also spoke about the challenges of publishing and funding a new book.  Kawasaki said:

” Our guideline is that it takes about $4,000 to content edit, copy edit, design a cover, and lay out the book. Really great marketing costs another $20,000. This makes the total cost approximately $25,000, worst case. There are ways to cut this to $2,000 by paying for professional copy editing and cover designing only. But $25,000 would pay for doing everything in a first class way.”

It takes a lot of book sales to just break even against $2,000 to $25,000 in costs – let alone make money.  So finding good talent at a reasonable cost is important.

Writer.ly doesn’t appear to be about driving costs down to levels that are unsustainable for writing professionals, however.  Its focus is more on finding talented people who are expert in particular niches, so that you bring in someone who helps you with many of the things publishers traditionally have done.   Writer.ly charges a 10% fee for using its marketplace.

Kelsye Nelson, CEO and co-founder of Writer.ly, is an author herself, as is co-founder Abigail Carter (pictured below, Nelson right and Carter left).  Nelson (@Kelsye) told us that the two came together through their writing interests:

“We actually met at a writing group I started four years ago. I have a degree in Writing from the Evergreen State College and did graduate work in publishing arts. However, went on to a career in marketing. [Co-founder] Abigail’s memoir, “The Alchemy of Loss,” about being widowed on 9/11 was a national best-seller in Canada, and one of the top 100 books of 2008 from the Globe Mail.”

Writer.ly is broader than serving book authors.  According to Nelson, it covers “the services marketplace infrastructure for the entire publishing industry. Everyone from writers, to magazine and journals, to publishers may post jobs on Writer.ly to find the help they need.” 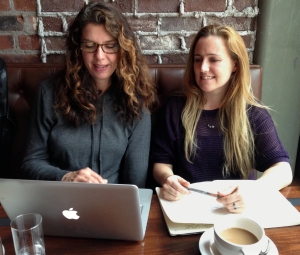 And just how did Writer.ly manage to snag someone as high-profile as Kawasaki as a board advisor?  It turns out that Nelson didn’t need to ambush Kawasaki as she initially intended at the recent San Francisco writer’s conference where he was keynoting.

Instead, she checked her contacts.  One of them introduced her via email, and she and Kawasaki ended up having lunch at the conference.

Writer.ly came on the scene in late 2012. In the four weeks since it has been accepting writers, Writer.ly has had over 900 writers  and writing professionals sign up, according to Nelson.

Writer.ly was founded after Nelson and Carter attended The Founders Institute, an early-stage startup accelerator.