Fortune 500 Thrives, But Small Businesses Not So Optimistic

Every month here in the United States the NFIB (National Federation of Independent Businesses) conducts a survey and updates its Small Business Optimism Index.

Small Business Optimism Up – Must Be Good News, Right?

The Optimism Index number went up, so you’re thinking, “it has to be good news.”  Well… not so fast.

With all such indices and surveys, it all depends on the perspective and context.  Yes, it’s positive news, but if I had to sum it up, I’d say “it’s hardly rousing.”

The NFIB notes that survey results are on a par with 2008.  That’s good because there’s been a bounce back.  But it’s bad in the sense that the results are actually below small business optimism levels for both the 1991-92 and 2001-02 recessions.  The Small Business Optimism Index chart tells the tale: 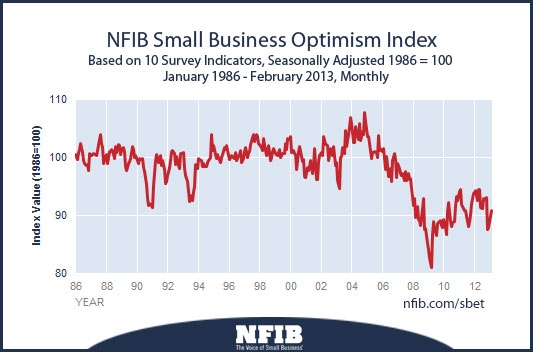 Here we are in March of 2013, with reports indicating the economy is improving. As I write this, the stock market in New York has had eight straight days of gains, based on great earnings reports by large corporations.  The Dow Jones Industrial Average is at an all-time high.

Some of the reason may be all the fear mongering coming out of Washington — and all the talk about raising government spending.  Paying for that spending disproportionately hits small business owners in the form of taxes — at least, that’s what many business owners believe, no matter what the pundits and politicians try to tell us.  Taxes and government regulation are bigger issues for small business owners than for the rest of the population, according to a Gallup poll.

While the Fortune 500 are enjoying record high earnings, Main Street earnings remain depressed. Far more firms report sales down quarter over quarter than up. Washington is manufacturing one crisis after another— the debt ceiling, the fiscal cliff and the sequester. Spreading fear and instability are certainly not a strategy to encourage investment and entrepreneurship. Three-quarters of small-business owners think that business conditions will be the same or worse in six months. The Index gained almost 2 points last month; that was good news. But, until owners’ forecast for the economy improves substantially, there will be little boost to hiring and spending from the small business half of the economy.

Here are some additional results highlighted by the NFIB release:

Results are based on responses by 870 NFIB-member small businesses surveyed randomly during the month of February.

The NFIB is a nonprofit founded in 1943, that advocates on behalf of small businesses. The organization represents small businesses of many sizes, from solo entrepreneurs to those with several hundred employees.  The typical NFIB member employs 10 people and reports gross sales of $500,000 a year.

The full NFIB report can be downloaded here (PDF).