Twitter Now Lets You Put Line Breaks in Your Tweets

Twitter keeps pushing the envelope about the style and content of tweets. Yesterday, it launched a new feature called “line breaks” – which are exactly what they sound like, line breaks inside tweets.  Here’s an example: 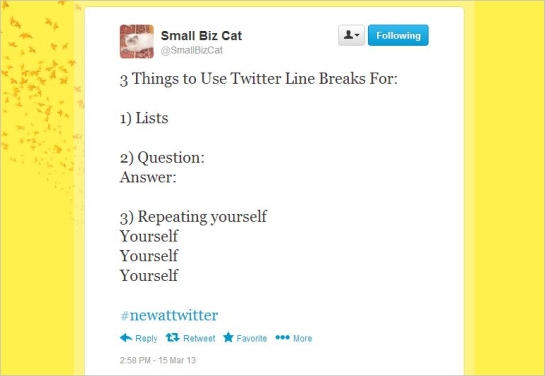 The announcement was made, where else, but in a tweet. The @TwitterForNews feed simply pushed out a tweet that said “Line Breaks” but with each letter on a separate line, along with the hashtag #newattwitter.

Digital Trends noted that the feature already existed in some mobile apps and desktop platforms, although many people may not have been aware of the capability.  With it being launched on the Web version of the platform (what I use 85% of the time), the feature is likely be used more:

What’s worth mentioning here though is that the ability to add line breaks already exists on its mobile and desktop platforms (iOS, Android, and Twitter for Mac to be specific) so it’s a natural progression for Twitter to roll this out finally to its Web app. Twitter didn’t end up saying a peep about the feature in other devices – it was more like an Easter egg until now. But thanks to the official tweet tweet, this time around a lot more people are aware about the line break’s existence.

This feature, while not a huge deal, expands the flexibility of messages you can create on the social sharing platform.  To use it, all you do is hit the Enter button to advance to a new line while composing your tweet.

1.) Line breaks can be used to emphasize points —   If you want to emphasize a portion of your tweet, just set it off on its own line. In a sea of over-used hashtags and what can appear to be gibberish to the uninitiated,  it can be refreshing to see a word or a few set apart with some free white space around them.

2.) Twitter line breaks can make your tweets easier to read — Sometimes in order to cram in as many words as possible, people abbreviate words — to the point it feels like you’re reading hieroglyphs.   But instead of abbreviating words, you can set them apart by line breaks, in lieu of some connector words or punctuation.

3.) Twitter line breaks make your tweets stand out — Line breaks give your tweets more physical space in the tweet stream, making them stand out because they look different.  That can lead to more engagement.

Reaction to the move has been mixed, according to ComputerWorld, with some people predicting an explosion of line-break spam. However, I predict that once the novelty wears off, Twitter line-break spam also will die back.

Then last summer Twitter introduced Twitter cards.  Twitter cards add attachments in the form of summaries of news articles to your tweets, so that people can preview them.  Here at Small Business Trends we implemented Twitter Cards just this week. We’ve already seen a small uptick in engagement with our content shared on Twitter. People can now preview links  before clicking.  Twitter cards also add a lot more information, including visually-interesting information, to our tweets.  With a little special programming, we’ve even been able to add author bylines and author Twitter handles to tweet summaries. This gives wider visibility to our authors.

Update April 30, 2018: After 5 years of experience with Twitter line breaks, I think we can conclude two things. First, Twitter still has its share of spammers unrelated to line breaks.  Second, Twitter line breaks can be an effective technique.  I use them in my tweets on occasion, but certainly not all the time.  Just like with animated gifs and other Twitter features, it’s a small technique that’s best not overused.