How Venture Capital Deals Have Changed Since the Great Recession

Here’s a bit of bad news for entrepreneurs seeking to finance high potential startups. Venture capitalists are doing fewer deals and investing less money than they did before the financial crisis and the Great Recession. According to data from Price Waterhouse Coopers and the National Venture Capital Association, the number of venture capital deals shrank from 4,211 in 2007 to 3,698 in 2012.

Deals are also smaller than they were before the Great Recession. In real dollar terms, the average deal size declined from $8.4 million in 2007 to $7.2 million in 2012.

The amount invested dropped even more. In inflation-adjusted terms, VC’s put a whopping 52 percent less into first time deals in 2012 than in 2007. 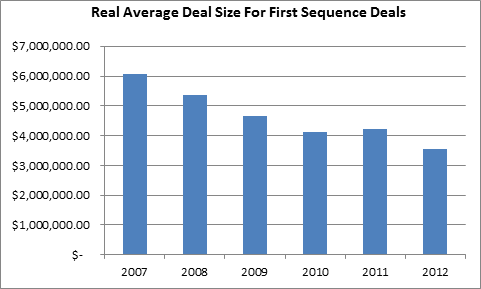 The average deal also has been shrinking since the Great Recession, as the figure above shows. In inflation-adjusted terms, the average 2012 first investment was only 59 percent the size of the average 2007 initial investment.

The shrinkage in “first sequence” deals has occurred across all investment stages, with the decline in the inflation-adjusted amount invested heaviest in the seed and expansion stages. For number of deals, the decline was present for all stages, except for the early stage.

However, the shift in the investment stage wasn’t towards younger companies. Both in terms of the amount invested and the number of deals, the growth in early stage financing came at the expense of declines in both seed stage deals and expansion stage deals (the stages before and after the early stage.)