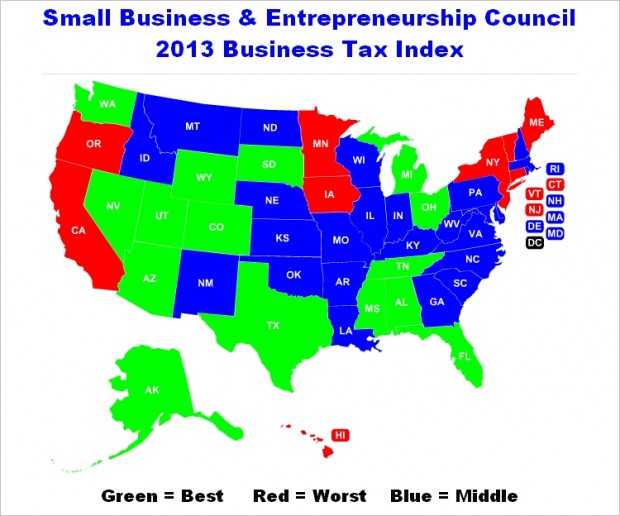 If you were to choose a state to do business in based solely on state tax systems, Texas and North Dakota would be at the top of the list. And at the bottom?  Try California, Hawaii and New Jersey.

The Small Business and Entrepreneurship Council has released its annual Business Tax Index 2013.  The Index ranks the 10 best and worst states in which to do business from a tax system perspective, especially for small business owners.

Topping the list this year for states offering the best tax climate for small businesses are:

The top 10 are unchanged from last year’s SBE ranking, according to our report of it. The only changes concern the order.  The most notable shifts were South Dakota and Texas switching between the top and second spots (although there’s little difference in point scores). Alaska dropped 3 places from seventh to tenth.

At the bottom of the list, the worst states in 2013 according to the SBE ranking methodology, include:

All ten bottom states were the same from last year. Only their order changed. Last year in 2012, Minnesota was ranked last in state small-business tax friendliness, but improved its position by seven places.

In the report, lead author and chief economist for the SBE Raymond J. Keating said, “At the federal level, businesses, investors and entrepreneurship have been hit hard in 2013 by big tax increases. But taxes matter for business at the state and local level as well. In the states, tax burdens vary widely, with competitiveness affected accordingly.”

States need to remain competitive to attract and retain small businesses.  The state tax environment is one consideration that makes one state more attractive than another. SBE Council President Karen Kerrigan says, “Competition for investment and business relocation is fierce, and state leaders who understand this dynamic are reshaping tax policies to enable capital formation and entrepreneurship.”

Kerrigan adds that Texas continues to be a benchmark for creating a small business tax environment favorable to small business owners. Other states are currently making changes to their tax laws that could alter next year’s rankings.  “Louisiana, Indiana, North Carolina and Nebraska have put forward bold tax reform proposals that will dramatically improve their competitive positions if enacted. Also, state efforts directed at tax reform are pushing Congress to act,” Kerrigan adds, according to a statement from the SBE accompanying the study.

To further explore, there’s an interactive map (pictured above). You can click on each state and see its point score, and highlights of ranking details. Go here for the interactive map.