Bezos Invests In Business Insider – How Soon Will He Expect Profits?

Bezos Expeditions, the personal investment company of Jeff Bezos, has led a new round of financing for Business Insider. Many of our existing investors, including Institutional Venture Partners and RRE Ventures, also participated. The new capital–$5 million–will allow us to continue to invest in our editorial, technology, and client teams and make Business Insider even better.

On a personal note, I will add that we are totally stoked about this.

Jeff Bezos’s leadership, vision, and philosophy at Amazon over the last two decades have inspired a whole generation of startups and entrepreneurs, including me. 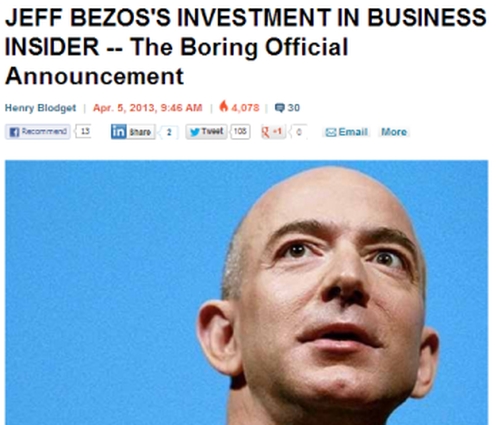 A New Breed of Digital Publication

Business Insider started out in 2007 as Silicon Alley Insider, a reference to Silicon Alley, an area in New York with a concentration of  Internet startups.  A few years later it rebranded as Business Insider. It expanded its focus to cover general business, not just the Manhattan startup scene.

Business Insider is one of the new breed of online-only publications.  It’s known for its provocative headlines and freewheeling mix of breaking news, analysis and entertainment. It’s sophisticated in the topics it covers, yet casual and scrappy in how it covers them. As one example, notice the headline in the image above.

It’s a formula people seem to like.  And no wonder.  News can be delivered in minutes or hours, versus days and weeks for print publications. You can access it whenever you want  — versus TV news that’s delivered on a schedule. It’s fun and  informative.

Digital publications can easily rival or exceed the reach of traditional news outlets.  At 24 million monthly unique visitors, Business Insider has a bigger reach than CNBC, according to the New Yorker.  Even a niche publication like ours here at Small Business Trends, where we get under a million monthly unique visitors, has a larger reach than most midsize city newspapers and trade publications, where circulation is in the tens of thousands to low hundreds of thousands.

What It Takes to Grow a Digital Publication

Quartz did a quick summary of Business Insider’s financial situation.  I include it here because of the fascinating numbers behind a high-growth digital publication:

It doesn’t surprise me that Business Insider lost money last year.  It takes money to grow in today’s competitive online news space.  Even in a self-funded news site like ours, we plow every penny back into the business.

Most outsiders don’t realize how much cost and labor is involved with running an online publication. True, digital publications are not saddled with the high costs of printing and distributing a print publication or broadcasting on television. But you still have to hire people, invest in technology, market the business, pay salespeople and cover all the  functions it takes to run a business such as bookkeeping and legal.

So, will this investment be enough for Business Insider to turn a profit, and how soon?  Amazon’s Bezos certainly has the kind of long-term patience I’d want if I were looking for an investor.  Amazon was unprofitable for the first 8 years of its history.  By that metric, Business Insider has at least until 2015.